The Walk to End Alzheimer's

Since my mom's diagnosis, I have been searching for ways to become involved in the dementia community and to help in some way. I received an email a few months ago, after leaving a comment on a blog, about a walk for Alzheimer's that was to take place near our home in Southern California. I thought about the idea and looked into the requirements to walk or start a team. I was a little concerned that I wouldn't be able to get a full team together. I was talking the idea over with my Aunt, who, without skipping a beat, said "I'll be there." Aunt Peggy and Uncle David live 5 1/2 hours away, so it was a big deal to me that they were so willing to come and support me in my efforts with the walk. I figured that if they could come all this way for the walk, surely other family members would jump on board and join the team. By the end of the next day, I signed up and formed "Team Dee" and had my first two team members: my Aunt Peggy and her husband, Uncle David. Soon after, my dad, sister, other family members and friends signed up and we began raising money for this great cause.

Last Saturday was the walk. I have been looking forward to it for months now. I was touched by the support of friends and family who made a point to join us in this walk. The grandkids were all there to show support for their grandma as well. 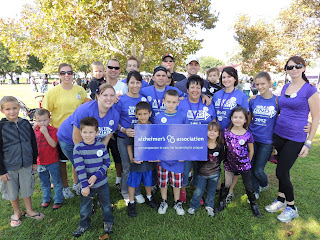 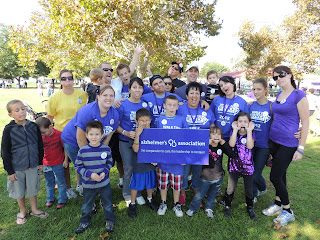 To get into the spirit of the walk, we each made a goal to raise $100 and wear our t-shirts. Most of us made it. Some came simply for support, which was appreciated as well. I made buttons for everyone to wear on their t-shirts. My friend, Stephani, made purple bows for the girls to wear. Everyone got bracelets to wear (which you can find in my dementia shop). 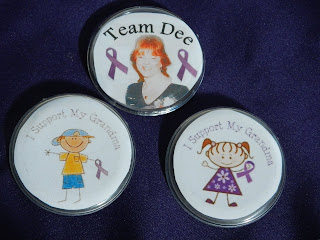 Because my dad, Aunt Peggy and I are a bit competitive by nature, we each raised over $500 (my dad raised close to $1,000) to become a part of the Champion's Club. We wore our medals proudly. 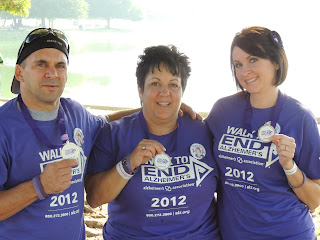 We had a lot of fun walking together for this great purpose. Our team was able to raise over $3,000 for the Alzheimer's Association in just a few short months, which put us on the top 5 fundraising families. We are already planning it out for next year. We were so set on earning our t-shirts, that we didn't realize (until it was too late) that teams are encouraged to make their own shirts. This was our first walk, so it's a learning curve. Next year we will be wearing our own shirts to wear proudly. And hopefully we can beat Pauline's Angels and take the award for the highest fundraising family team ;)

When you do a walk for other causes-diabetes, cancer, etc-the person you are walking for is generally aware that you are supporting them in the cause. That was the only downer of this walk; my mom had no clue what we were doing. Even if we had tried explaining it to her, she would not have grasped the concept. I don't need a pat on the back from my mom, I only want her to know just how much we love her and support her and are doing all we can to be involved and help in finding the cure for the dementia that has taken her away from us. I suppose at some point in time (in the next life) she will understand what we are doing for her. In the meantime, it feels good to be involved in something that is bigger than ourselves and to join forces with the millions of other people affected by this horrific disease.
Posted by Cassandra at 9:40 AM

Email ThisBlogThis!Share to TwitterShare to FacebookShare to Pinterest
Labels: causes for dementia, finding the cure for dementia, team dee, walk to end alzheimer's