For some time now, mom has had issues with money. I've blogged about it before, but it seems to getting worse and worse.

I was reminded of just how bad the situation is becoming last week, when my Uncle Mike texted me after his trip to Kmart with my mom. He had texted me earlier that morning to double check that it would be okay to take her to buy some make-up at Kmart. I figured my dad wouldn't mind if he took her to get a couple beauty items that she wanted.

After spending a substancial amount of time in the make-up aisle, and trying to figure out where to find the usual items she uses, they made their way to the cashier. When it was mom's turn to pay, the items came to the total of about $38.00. Mom was quite surprised that her selected make-up items had cost so much. In the past (even within the last year), she's been very good about adding things up in her head to know how much her bill will be. It became apparent, that day at the cash register, that mom has lost that ability.

Mom whipped out her change purse, took out a few dollar bills and began stacking an assortment of dimes, nickels and quarters as she tried to count it out to $38.00.

"Do you have enough?" Uncle Mike asked her. He also asked her if she had her debit card with her to pay.

He related that mom was unresponsive to his promptings and instead focused on sorting her coins into dollar increments. Meanwhile, the line behind mom was growing. People began moving to different lines to avoid the woman at the front who was counting her pennies.

At last, she finished counting. She had come up with *about* $16.00. As she rummaged through her purse and tried to figure out what to do next, Uncle Mike offered to pick up the remaining tab, knowing my dad would later reimburse him for whatever he needed to account for. He gave her the remaining $22.00 that she needed and she paid for her make-up. As they made their way out the doors, make-up bag in hand, mom gave Uncle Mike a hug and thanked him for his gift to her. He chuckled and said,

"Well I'm sure Bud will pay me back."

"Oh, I have my ATM card, do you want to take me to the bank so I can get you money?"

You mean she had her bank card the whole time??? Uncle Mike shook his head and told her it was fine; he'd just get the money later from Bud. He didn't want to deal with her at an ATM and wasn't sure if she would try to take money that wasn't meant to take out.

When he related this story to me, I was a little surprised. I've known her concept of money was diminishing, but up until now she seems to have been able to stay within her budget and count out how much she needs.

Today, when I was at her house, mom got out her little coin jar and dumped the change into her lap. She began sorting the coins by quarters, nickels, dimes and pennies. She ended up with about $10.00 in quarters and another $6.91 in other various coins. As she finished counting her change, I walked out of her room and back down the hallway to the livingroom, to check on my boys. Mom soon followed behind me and said,

"I have six dollars and ninety-one cents more, I need to go to the bank to get dollars. So can you take me to the bank now to get these to dollars?"

I had to hold back my giggles. Was it worth it to go to the bank to change out such a small amount? To mom, it was. There was no point in trying to reason with her to save up her change until there was a larger amount to cash in. So we got on our shoes and loaded into the car.

She wanted me to stay in the car while she went in, but I was hesitant to send her in alone and I found an excuse to accompany her inside the bank (I had a couple deposits to make). She asked the woman at the front desk,

"Can I get dollars for this?"

The woman sent her to the counter where a teller would assist her in her transaction.

Mom approached the teller and said,

"I want dollars for this."

The young woman behind the glass smiled and said she could help her; mom just needed to slip the coins under the glass. 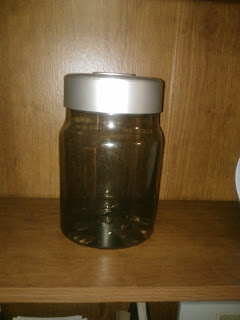 "But how do I get this all under there? It's too big," mom said, holding her coin jar against the glass.

"Mom, she said to dump the coins out," I said, unscrewing the lid and dumping the money out under the glass which separated us from the teller.

The bank teller sorted out mom's change, as mom told her how good it was for her to have some dollars to spend and what a blessing it was. She also made sure to remind the teller how much was there and not to forget to count the quarters (I slipped the teller an "oops card"). After a few minutes, the teller gave mom some "dollars": one-ten dollar bill, one-five dollar bill, one-one dollar bill and the remaining 91 cents. Mom became confused when the coins were handed back to her.

"Mom, that isn't enough to make a $1 bill," I said, placing my hand on hers to stop her from sending it back.

"No I came to get dollars," she continued to object.

Again, I tried explaining to her that it wasn't enough to make a whole dollar; it was only 91 cents. Mom looked puzzled and the bank teller studied our interaction. Mom kept counting the 91 cents, trying to make sense of what I was explaining to her. Had my arms not been full with my squirmy one-year old, not to mention my fidgety 4-year old standing beside me, I would have picked some change out of my wallet to make it an even dollar. Eventually, I reassured her that it was done correctly and picked up the change and the dollar, handing it to her and telling her to put it in her change purse. She seemed satisfied and did what I instructed her to do.

It's going to be very hard to do, but I think it may be time to take the ATM cards away and start giving her a small allowance, as the concept of money simply isn't there anymore :(
Posted by Cassandra at 3:47 PM

Email ThisBlogThis!Share to TwitterShare to FacebookShare to Pinterest
Labels: losing the concept of money, money