A couple of weeks ago, my adopted-daughter got married. There was a wedding and reception here in California, followed by a reception in Colorado the following week (where my new son-in-law is from). My Aunt and cousins live in the same Colorado town as Cameron, so between wedding receptions, we drove out to Colorado and vacationed with family while supporting Maurina and Cameron with their family and friends out there. Needless to say, the past few weeks have been super busy, fun, stressful, exciting...such a mix of emotions!! My heart is so happy when I look at this beautiful picture. I love my family. 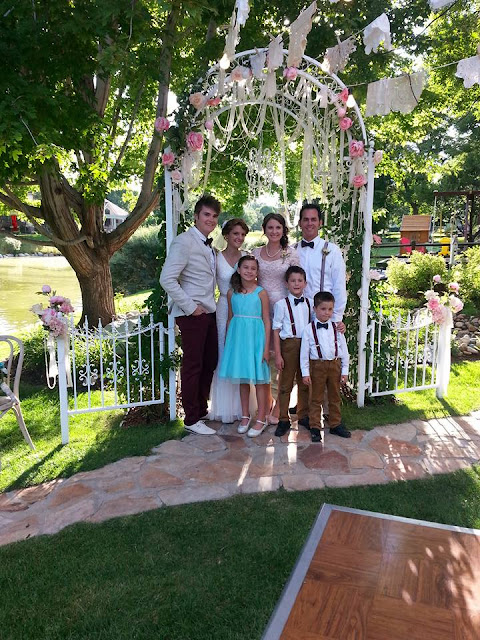 It goes without saying that I missed my mom terribly through this whole affair. My thoughts were turned her frequently and her absence was felt in our hearts.

It had been nearly two weeks since I'd seen my mom before my return last week. I wouldn't say that there has been a huge difference in the time that has lapsed, but there seems to be a steady decline week by week. My dad and I were talking the other day about some things that my mom used to fuss over that she no longer pays any interest to. I thought I'd write some of them down, just to mark her progression.

-Mom no longer asks about dyeing her hair. I think that concept is totally gone. She doesn't even talk about needing her hair cut! She used to fuss about having every hair in place as well; most days it looks as if she hasn't even brushed her hair (although I see the efforts being made...she has just lost that skill).
-Mom is losing concept of time and isn't so rigid on her routine. She still does things in "sections" of the day (morning, afternoon, evening) but aside from eating lunch at 12:00 and dinner at 4:30 (even that can slightly vary) she isn't strictly adhering to a schedule. She might nap at 1:00 on one day and 12:00 on another. I find her in bed often, as a matter of fact. She seems more restless these days and bounces around all day from bed to computer, to peering out the front door or window and devising a way to escape. Some days she will take her medicine at the wrong times as well. It isn't too much of a problem since most of her meds are supplements anyway, but a few times she has dropped a pill on the floor and it wasn't discovered until later.
-She will go longer and longer between shower days, to the point where we've now decided to set a shower schedule. On those days, either my dad or I will see that she gets through the shower. She resists and it takes a little force to get her in, but once she's in she knows mostly what to do (even though she uses half a bottle of shampoo every time!!)
-I've noticed that mom isn't using her Bath & Body Works spray anymore. Just a few months ago she was using a few dozen sprays every morning while getting ready (no exaggeration). She still uses the shower gel to wash her hands and moisturize her face (yes, you read that right), but I don't see or smell the body spray anymore. Furthermore, I haven't heard her nag my dad about going to Bath & Body Works in a couple months. I didn't realize that until I started typing. I bet the gals at the store are missing their sales ;)
-Mom's speech is continuing to decline. I've been pretty good at deciphering what she says, but even I am having trouble understanding what she says. I can usually pick out a word or two of what she's saying and make sense of which topic she's speaking of, but there are some times where I am completely confused at what she is trying to tell me.
-Mom still likes her walks, although the only place she ever goes is her sister's house or the Avon lady/friend up the street (I haven't been hearing about her as much the past few weeks though). She used to sprint up the street when we let her out to go walking. Her pace has slowed considerably. She can now sprint only a couple houses before she starts panting. Remarkably, she still insists on walking and getting her exercise, but she makes frequent stops and is panting and sweating by the time she will resign to getting in the car. It makes me nervous to let her walk too far for fear that she'll collapse, so we always have a car following behind to pick her up when she tires.

And there you have it-an update of the changes over the past few months.
Posted by Cassandra at 11:13 AM