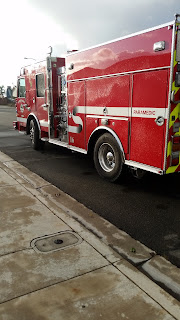 We had quite an eventful day last Sunday. Okay, the picture of the firetruck may be over dramatic, but I got your attention ;) (The firetruck DID make an appearance).

Let me start by reminding you of Mom's obsession with her jewelry. She no longer attempts make-up, but she still makes sure her earrings are in her ears and her wedding ring is on her finger. Except that it's not really her wedding ring. She dropped her real wedding ring in the driveway a couple of years ago (thankfully we found it and locked it away!) Since then, we've put a "cheap" ring on her finger. It was an adjustable flower ring that belonged to her mother. Over time, the rhinestones have all fallen out and the metal has discolored. Over the summer, when Dad went on a cruise with his sisters, he picked out a silver, stainless steel ring for mom to wear as her wedding ring. I thought the gesture was SO sweet; Mom was just content to have a ring on her finger and it fit her perfectly.

Fast forward a few months...Mom has been dealing with some swelling, mostly in her ankles. I bathe her 3 times a week and I haven't noticed any problem with her ring. On occasion, I will move it around and make sure everything is okay but apparently it's been a while since I've checked. Our caregiver texted me on Saturday to say that she noticed Mom's finger looked irritated underneath the ring and that it appeared to be stuck. The next day (Sunday), while family gathered for dinner, I looked at Mom's finger. Her finger was so swollen that I couldn't move the ring at all. My Aunt Peggy and I got some olive oil and attempted to remove the ring from her finger. But...it wouldn't come off. We tried and tried and could only manage to move it just beneath her knuckle. With the ring slightly moved, we were able to get a good look at the red ring that her metal one had left behind on her skin. It looked raw and very sore; the ring needed to come off and soon. But now we had a big problem: how do we get this ring off of Mom's finger?? The ring was so tight that we couldn't get a tool under there ourselves to cut it off. And with her lack of comprehension, many things could go wrong.

As we were all brainstorming, I wondered if we could call a non-emergency line and get a paramedic to come out and cut it off. After some discussion, my husband called the fire department who said that they could, in fact, come over and cut the ring off her finger with a special tool. Twenty minutes later, three firemen walked through the living room door and attempted to get the ring off Mom's finger as my dad, Aunt Peggy and I held Mom still. Mom nervously tapped her foot while she giggled; Aunt Peggy thinks she was giggling because of the firemen, but Mom giggles nervously when people are in her space and trying to hold her still. But who knows, maybe she was checking them out. Ha ha. 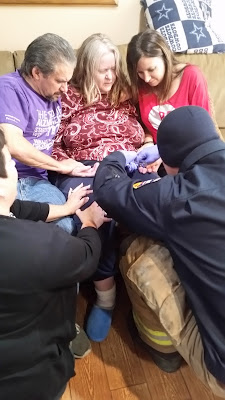 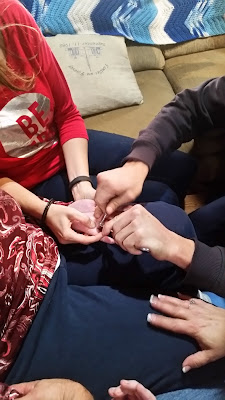 Did I mention that her ring was stainless steel? Note to self, stainless steel is almost indestructible! Her tough ring was barely scratched at the attempts of their special tool. Apparently it only works on soft metals. They gave it their best and then decided that this tool was not cut for the job. They had a saw that would work, but decided it was too risky because of her agitation and inability to hold still. They told us to take her into Urgent Care or the ER where they had the ability to sedate her through the process. I hate ER with a passion (none of us wanted to go that route) so I called Urgent Care first. They told me that they didn't have the right tools to do it, so we were left with no choice but to take her to the ER.

By that time, my Aunt Sharon (who is an ICU nurse) had arrived on scene for family dinner. Before taking her to the ER, we decided to give it one last try. Aunt Sharon held Mom's hand in a bowl of ice water, hoping to get the swelling down. Unfortunately, that made no difference and it was more difficult to try and keep her hand in the water. So...off to the ER we went. We sat Mom inbetween my dad and me in the backseat of Aunt Sharon's car while we made the drive across town. Aunt Sharon and Aunt Peggy came for moral support.

At the ER, my dad went to check Mom in, while Aunt Peggy went to get a wheelchair and I held onto Mom in the backseat of the car. We use the wheelchair for doctor's visits not because she can't walk, but because she can't follow instruction and she will either refuse to walk or walk in the wrong direction. It's easier to sit her down and push her where we need to go. We transitioned Mom to the wheelchair and to make a very long and boring story short, we waited in the ER for about an hour and a half before she was finally seen by the doctor. My Aunts took turns pushing her around the waiting room in her wheelchair for the entire waiting time in an effort to keep her from getting out of the chair and running away. Thankfully, it worked and we were able to keep Mom contained and somewhat comfortable.

Once Mom was called back to a room, they would only allow my dad to back with her, despite our protests. We tried to tell them that they would need a second person to hold her but they were insistent that only one person go back. Quite frankly, they were rude and uncompassionate. Of course once they got her back in the room, they sent one nurse out to get another to hold her arm (why didn't they come back for one of us??) Medical attention, particularly ER and hospital visits are extremely frustrating when dealing with dementia because most of the medical professionals really don't know what they're dealing with; at least, that's been our experience. At any rate, the report from my dad was that they were able to get the ring cut off without any sedation, but her ring was so strong that it broke their tool! They had to make two cuts and remove a piece, and then pull the ring apart. Luckily, there were no signs of infection on her finger, although it did bleed a little and was left very raw and red. Poor Mom. We've been keeping Neosporin on it and it seems to be healing well.

Needless to say, it was a big day for Mom, who usually spends quiet days at home or sitting on her chair in the front yard. She threw up in the car on the way home (she tends to get car sick and it was probably too much excitement for her) but she slept pretty good that night!

I didn't hear this firsthand from my dad (so hopefully I'm accurate in relaying this) but my Aunt told me something that my dad told her after everything was over. He told her that while they were back in the waiting room, Dad was sitting in front of Mom, holding her hand. She looked at him and leaned forward and gave him a kiss. What a sweet moment that must have been for my dad. It makes me tear up just thinking about it. Affection has been long gone but every now and then (very, very rarely), Mom will lean over and give Dad a kiss. It reminds me that even when all seems lost, she is still somewhere in there. My dad is her rock and the love of her life. Even though she can't express it in words, I know that she is aware of his love and support for her. I just know it!
Posted by Cassandra at 12:00 PM