I am a mom to a very busy, very curious, very independent and strong-willed two-year-old. He’s adorable. He melts my heart and he brings a smile to my face each and every day. He also leaves me exhausted by the end of the day. Especially on those days that I have to take him shopping. Today was one such day. We went shopping at Kohl’s. He was adamant that he was NOT going in a cart. I was able to bribe him for a few minutes with some fruit snacks. But once those were gone, so was my two-year-old. He was able to unlatch that cheap seatbelt and climbed right out of that cart. When he’s this determined to stay out of the cart, I give him a choice,

“Hold my hand or ride in the cart” and he will choose to hold my hand.

Not today! He insisted he could walk by himself. He was like a little Tasmanian Devil, running up and down the aisles, hiding in the clothing racks (pulling clothes off the hangers in the process) and touching anything else that caught his attention. Many times throughout our trip, I *tried* to pick him up and carry him. I was sure the police were going to be coming into the store at any given moment on suspected child abduction…that’s how big of a fit he threw when I tried to carry him along. Body wrenching and wiggling, legs kicking and lungs screaming.

Now…add my 52 year-old-mom-with-dementia into the mix and you can guess how my Monday morning went. Or maybe you can’t guess. Because there’s always something new and exciting with dementia. 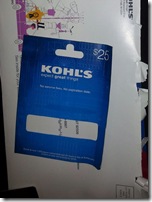 Preparing mom for her shopping trip was exhausting enough. Before we left, we spent 15 minutes sitting in her living room as she looked through her wallet for her Kohl’s gift card. Right away she [thought] she found it. I spent the next 10 minutes trying to explain to her that what she held in her hand was NOT the gift card, but rather the cardboard that was attached to the gift card when it was purchased. I could have just as well explained it to the couch we were sitting on, with the response I was getting from mom. She tucked her “gift card”, along with her Kohl’s coupons (which she was confused about) into an envelope, zipped up her purse and was ready to go. I try to avoid a scene as best I can when I take her out, so I asked mom to get out her wallet again and find the right card. No matter which way I tried to explain it to her, she didn’t understand and she mostly ignored me. At one point, as I was trying to explain it to her, I tried to unzip her purse to show her that I needed to look through her wallet to find the card. Big mistake. She ripped her purse away from me and glaringly said,

I honestly can’t even remember how it happened, but eventually I was able to convince her to get her wallet out again and we found her gift card. She placed it in the envelope along with the cardboard cut out.

Back to Kohl’s. You have the visual of my rowdy two-year-old. Now, picture my mom, racing around the store looking for something specific; me, chasing quickly behind her while pushing my toddler in a cart (he was just finishing up his fruit snacks), attempting to ask her what she was looking for. She was up one aisle and down the other as I maneuvered behind her with the cart. She was much quicker than I was and it’s hard to push those carts, so it will come as no surprise when I tell you that she disappeared from my line of vision. We were in the back of the store, in the home decor section. I turned up an aisle of picture frames just in time to see mom’s red hair flash around the corner. And then I heard an ear piercing noise. My first instinct was to cover my ears, but I knew right away that my mom was responsible for setting off the store alarm. I rushed around the corner to see mom, standing by the emergency exit, one hand still on the door, looking puzzled at where that loud sound was coming from.

I grabbed mom’s arm and pulled her away from the door, the alarm screaming so loudly that mom couldn’t hear me. In no time, there was a Kohl’s associate rushing to the back door to turn off the alarm. I apologized for the mistake (once the piercing sound was stopped) and pondered on the irony of the situation: it wasn’t my two-year-old that has set off the alarm, but rather my grown mom.

Mom seemed not to notice the commotion she had caused but rather went about her goose chase, calling across the store,

The sales associate (who had turned off the alarm) came back to mom at mom’s beckoned call, and patiently assisted her as mom asked her what her Kohl’s coupon mailers were for (not that I hadn’t explained it to her at least half a dozen times already!!!!!)

The rest of the shopping trip was fairly uneventful, aside from chasing a feisty two-year-old while attempting to not lose my mom. By the time we left, I felt ready for a nap!!

I have said this once before and with the holidays soon approaching I will say it again…to all those dear family members (and siblings of mine) who want to get mom a gift card for Christmas (or any other occasion): If you get her the card, you get to take her to spend it! It’s just not fair for me to have all this fun by myself ;)

Posted by Cassandra at 2:09 PM

Email ThisBlogThis!Share to TwitterShare to FacebookShare to Pinterest
Labels: alarm, getting into trouble, getting lost, shopping, shopping with dementia