“Today is my birthday and I’m 53, but how old are you?” she asked. It was too cute. It reminded me of my kids when they have birthdays- excited to let everyone know about their special day! She also let us all know that what she wanted for her birthday was money.

Later that afternoon, mom came over for a little birthday celebration. Only one of her siblings was able to come (her sister, Claudia) as well as my sister’s family. We all feel like this is probably the last year that she will understand the significance of her birthday. So it was important to us that we got together and celebrated with her. 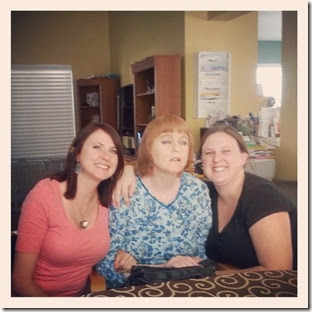 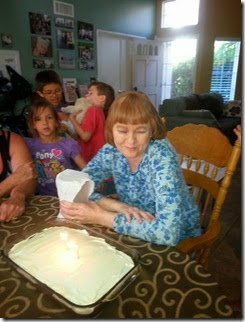 Of course she didn’t eat any of our food; she brought over her “Slim Fast”. But that’s okay. I don’t think she really understood what birthday cake was (nor would she eat it), but we lit candles and sang to her anyway. As we sang, she seemed so happy, a grin appearing on her face. When it came time to blow out the candles, she had no idea what we were coaching her to do. The grandkids helped her blow them out. 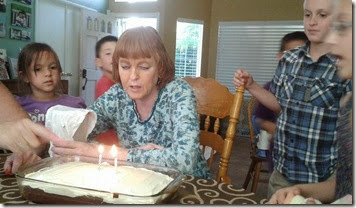 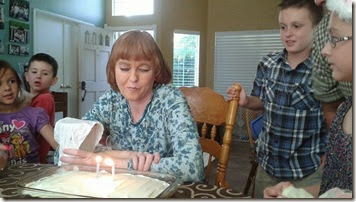 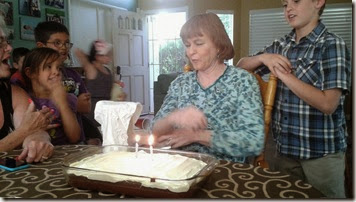 After we sang Happy Birthday, we tried to get the grandkids to take a picture with grandma (well…half the grandkids, anyway). We couldn’t get mom to look at the camera. It’s been a challenge for a while, but this time there wasn’t one shot where she looked at the camera and smiled. I suppose that concept is lost with many others. The kids were pretty funny though, pointing at the camera and making noises to get grandma to look at us. 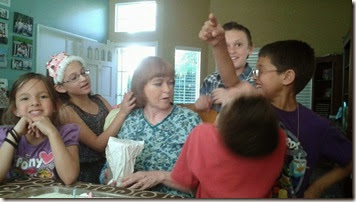 My dad thought he would be funny and he waved a dollar at mom from the opposite side of the table, in an effort to draw her attention towards the camera. No sooner than mom laid eyes on the dollar than she jumped up out her seat to try and retrieve it from dad. We were busting up with laughter. 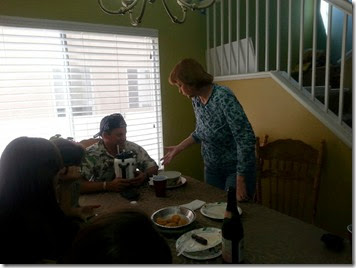 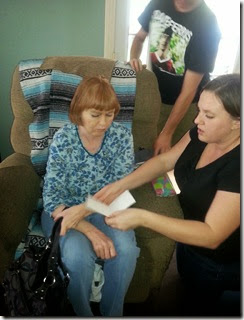 Mom was a bit confused at what presents were. We led her to the rocking chair and practically forced her to sit down while we hurriedly brought over her presents before she moved out of her seat. She opened my sister’s present first and kept asking what the tissue paper was and what it was for. My sister knelt beside her and helped her to open the gifts as she showed/explained to her what each item was. After opening each one, she tried to get out of her seat as we gently sat her back down to tell her there was more. It reminded me of when each of my kids had their first birthdays. They hardly knew what to do with the beautifully wrapped packages placed before them. I coaxed them to tear the paper and eventually ended up ripping the paper off for them. Once they were done with that gift, they wanted to get up and run around or play with their new toy. It was with much protesting that I held them down to open their next gift. That was exactly how it played out with mom. Only instead of becoming excited about her presents, she would sigh and whine, 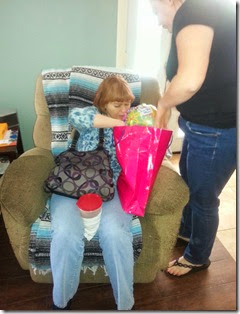 [Of course we didn’t take it personal; we could only laugh.]

Even though mom was slightly disappointed in her presents, even though she didn’t eat food or cake, I think she enjoyed her special day. It’s rare to get her to engage with us these days. It was nice to have her over and spend some time with her for her birthday.

Happy Birthday Mom!! I love you!!

Posted by Cassandra at 2:04 PM