It's taken me some time to write this post. I don't know why; I suppose the topic is just a bit uncomfortable, but it has to be talked about. I am talking about the inevitable outcome of dementia. The fact is, dementia is a terminal disease. They will not list it as a cause of death on a death certificate (instead they will name it as heart failure, pneumonia, etc), but it is dementia that leads up to the final outcome.

It takes time to come to accept this. For a long while, we held onto hope that we might find a cure or some way to reverse the effects of the disease. While I don't think we can ever give up complete hope, we are wise enough to know that those chances are slim to none. As my mom has declined more and more over this past year, I've begun to have a little bit of anxiety about what the near future holds. By the end of last year, it was consuming my thoughts: what will happen when she goes? Are we ready as we can be? Does anyone else in my family, besides me, feel the necessity and the weight of the decisions that need to be made?

We've talked about things a little bit over the past few years. When mom was more in her right mind she had talked about being buried in the same cemetery as her mom. Oddly enough, mom had even talked about (in earlier times) songs she wanted sung at her funeral and how she wanted to be dressed. Those things are always in the back of my mind. We've had an idea of what needed to be done, it was all just a matter of getting it done. It's a difficult step to take.

After having a conversation with my dad about my anxieties last month, he decided it was time to shop around for a plot and start getting things in order for the inevitable. This is a good idea even when not dealing with a terminal illness, but in situations such as these, it's even more important to get it done. We've learned quite a few times over the past few years, in losing loved ones, how much easier it is to have these things in order beforehand, rather than facing it in the moment of loss and grief.

Dad made a phone call to a broker and got a price on a plot in the same cemetery that mom's mom is buried in. He wasn't thrilled with the price-they've gone up a little since the last time he's done this-so he decided to go down to the cemetery himself and see if he could get a better price. I offered to go with him, but on the day he was able to go, I had my 4 year old home (he would've been a distraction) so he just went alone. He called me when he was finished to share the outcome.

"Were you able to get a better price?" I asked.

"No, I actually paid a little bit more, BUT I was able to get a double plot two spots down from grandma and grandma. What do you think? Do you think that would make her happy?"

It was hard to even put into words how I felt, but I could feel my dad's love and devotion for my mom. I could hear it in his voice, as there was a little bit of excitement that mom would be pleased with the choice he made. Even though my mom is seemingly unaware of all that is going on around her, my dad still thought about her and what she would want, and he was willing to pay a little more to fulfill that wish for her. If this isn't love, then I don't know what is. 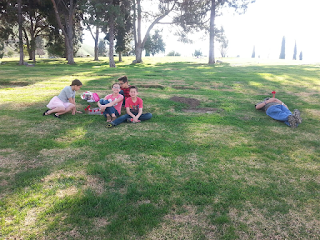 Last weekend, on Valentine's Day, we visited the cemetery and decorated the graves of family members that we love and miss. Dad was excited to show us where he and mom will one day rest together, just next to my grandparents. You can see in the picture: the kids are at grandma and grandpa's grave and where dad is laying will be their spot.

To lighten the mood, dad laid down to demonstrate for us where he will be. This may seem a little morbid to some people, but I love and admire my dad's sense of humor; it has really made all of this so much easier to talk about and accept. Although we hate thinking about what is to come, at least we know that we won't have to deal with those decisions in the moment, and mom will be so happy to someday know of this beautiful, final act of love from my dad. 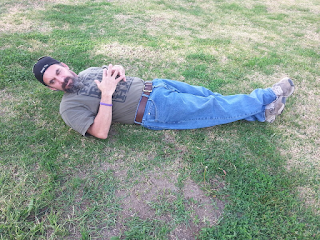 Death will not be the end. It is not a final good-bye, but a "see you later". It is only temporary until we can see my mom again, restored to her perfect, beautiful, self. When the time comes that she leaves this life, it will be hard. Really hard. I still miss my family and friends (who have gone before me) every day. It is an ache, like a homesickness that never goes away, but I believe I will see them all again. This is the faith I hold on to that gets me through the sad times.

Email ThisBlogThis!Share to TwitterShare to FacebookShare to Pinterest
Labels: burial, death, plot, preparing for the end