This post was written by my Uncle Jeff, my mom's brother. 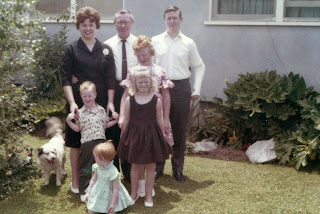 Deana and I were the closest in age of 5 children at 2 years apart. Our birthdays were a week apart with Deana’s following mine. Mom many times would make us one cake for both birthdays so compromise was always needed because Deana always wanted Chocolate cake and ice cream and I usually wanted Strawberry, Deana also hated coconut and I loved it. Mom would usually do half and half on the cake to satisfy our differences.

Since we were so close in age Deana and I did a lot together when we were younger. I can remember a time when Deana did not eat her vegetables and didn’t get dessert so I snuck her some of mine. As she crawled under the table to my chair I spoon fed her some of my dessert when no one was looking. I remember a time also when we went to Stater Brothers Market in Rubidoux Ca. I saw Deana chewing some Bazooka gum and wondering where she got it from she admitted to me she took a piece from the supermarket bin and began chewing it. I felt the need to rat her out for “stealing” the gum and told dad. Dad made her go up front to pay for it. I followed Deana up to the register where she had to “confess” her sins. She simply went up front with her penny to pay for the gum and handed it to the checker and said “this is for some gum that I am already chewing”. Wow, here I thought she was going to have to confess she took the gum but I had been out witted!

I remember another Super Market story, this one happened at Michaels Market in Glen Avon where we grew up. We entered the produce section and we were blowing air out of straws over the avocadoes that in those days sat in saw dust, it was cool watching the saw dust scatter. Deana rather than only exhaling made an inhale and sucked saw dust into her throat. She started choking and dad immediately grabbed her and I think even flipped her upside down and reached into her throat with his finger and scooped out the saw dust. Whew dad saved my sister!

Last story for now but Deana and I were walking to a friend’s house that took us to primary, a weekly church activity function for children. I was into the ‘playing with matches’ stage of my life and liked flicking them off the match book with my finger and watch them flare up then extinguish as they flung through the air. We were behind the market near a canal and I was doing my flinging! Next thing I know a man stops his car and yells to Deana and me to “Help stamp out this fire”! I had not even noticed my match didn’t go out and started the field on fire behind us. Some quick stamping and a disaster had been averted and we finished our walk to our friend’s home for our ride! I do not know why the man didn’t interrogate me as to how the fire started but so glad I didn’t get busted any further.

Deana has an outstanding memory of many past events and even in her dementia she seems to recall events I barely remember or do not remember at all. It seems so odd to me how certain things remain and others vanish completely from memory. When Deana visited me in the summer of 2012 she didn’t even know what a scrabble game was and said she has never played ‘that game’ yet she use to play it all the time especially when camping at Heart Bar camp ground. I showed her how to play and at first she wanted to play turn after turn like a crossword puzzle and not let me have my turn until she finally got it and we actually took turns. Eventually however when words were getting harder to find she immediately abandoned the game and got up and left the table. I felt this was the very few moments where I had actually connected with her for a small period of time during her stay. I am grateful to have so many memories and will have to share more later!