Holidays have always been a big production in our family. Both my dad and my mom grew up in large families, with 4 and 5 siblings each. Our holidays were an entire family affair: aunts, uncles, cousins, grandparents...

And the food? The food was never anything less than amazing! I've said it before-my grandma was a magnificent cook, winning many awards for her recipes and cooking skills. She passed those skills onto her children, including my mom. When we got together for holidays, particularly Thanksgiving, it was a heavenly feast. My mom ruled the kitchen and every holiday feast was magnificent.

Since I've gotten married, we alternate years on where we spend Thanksgiving between my family and my husband's family. This year was our year to spend with my family. As I reflected about the upcoming holiday and particularly the changes this year with my mom, I realized just how long it's been since I've had a "normal" Thanksgiving with her. Last year, we were with my in-laws. The year before that, it was Thanksgiving at my house with my parents and my dad's side of the family. And even then, mom was already "changing". She made a couple of pies that year, but somehow she couldn't get them quite right and they weren't as tasty as they used to be. The year before that: in-laws. Year before that, my brother got married over Thanksgiving break in Florida and my parents flew out and spent the holiday with him. It's probably been a good 6 years since we've had a Thanksgiving with my family with my mom in her normal form.

Thanksgiving this year was bittersweet. Sweet because my brother and his family were coming in to celebrate with us, but bitter because of the changes with my mom. In the weeks prior to Thanksgiving, I had many anxieties and concerns regarding my mom. Would she remember what Thanksgiving is? Would she engage with the family, or would she throw a fit to stay at home? Would she be able to at least help in preparing any of the food?

Last year, my sister and dad reported that my mom was not interested in preparing food for Thanksgiving. In fact, my dad had made a joke that they were going to a restaurant instead of the usual feast (blasphemy in our family!) and as my dad pulled out the turkey to prep, mom said, "I thought we were going to a restaurant." Once she figured out that my dad and sister were making the usual Thanksgiving feast, mom was in the kitchen, peeking over their shoulders and telling them what they were doing wrong.

"My mom always taught me to do it this way," she said, over and over as my dad prepared the turkey, the potatoes, the vegetables, and instructing them on how to prepare the food properly.

I wondered if this would be the case again this year. As annoying as it was to have her hovering and correcting, at least she was aware and familiar with our traditional holiday foods.

Mom has not made any mention of the holidays this year. Even as we coordinated food assignments, I knew mom would not be involved. A few days before Thanksgiving, I asked her if she knew what holiday was coming up. After several promptings, she figured out that it was "that one holiday thing where you eat that certain food" (I can't remembered if she named it turkey or insinuated). At least she was associating the holiday with the feast! 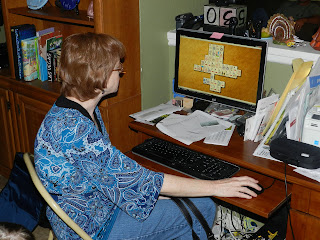 Now to Thanksgiving day: my dad came over in the morning to get his turkey going on the BBQ, while I got my turkey prepped for the oven. He came back a little before 1:00, with my mom. Immediately, my mom marched upstairs to my room, purse still on her shoulder, because 1:00 is her naptime. She laid down on my bed, complaining that it was too light in my room, the kids were too noisy, my bed isn't as comfortable and she wishes my dad would have let her stay home to take her nap. I left her alone to her nap. By 2:30, she was downstairs to take her medicine, again complaining about how she didn't rest well due to the noise and light. She sat in the living room for a few minutes, having a one-sided conversation with my great-grandma. Once she was finished telling grandma about her ailments, she came to my computer, where she sat, playing games, the remainder of the afternoon while the rest of us prepared the food for our feast.

When it was time to eat, my mom took one look at the table and immediately began complaining,

"Where's the salad? Why isn't there salad? I don't like any of this stuff, I want my salad, darn it."

We explained to her that it was Thanksgiving and that these were the foods that she has always liked; her family's recipes. She insisted that she did not like those foods and that it would make her tummy sick to eat it. We tried to coax her to eat just a little turkey or just a little of this or that. She ended up with a tiny dessert plate with a scoop of mashed potatoes (which she only ate half of), a buttered roll (she only ate half) and a few vegetables from a veggie platter that she drowned in ranch dressing. Try as we might, we could not get her to eat any more than that.

She went back to her computer games until she grew tired and wanted to go home. I think we were able to get her to stay until around 7:00; when my Aunt was the first to leave, my mom literally chased her down (as my Aunt was taking her dishes to the car) to ask her to give her a ride home. By that time, my dad gave in to her wishes and took her home while he drove my great-grandma back to her home as well.

I had been looking forward very much to Thanksgiving this year. I love having my brother here and love getting together with the family. I had a good time visiting with everyone; yet I found myself, at the end of the day, feeling rather melancholy. I think part of that was exhaustion; I had spent nearly 2 entire days in the kitchen preparing all of the food-the homemade rolls, the turkey, the potatoes and vegetables, the pies. Not to mention all of the prep work and cleaning up that comes with cooking and hosting Thanksgiving. A big part of it was the empty feeling at the loss of having my mom there to participate in the cooking and festivities. Though I've hosted many holidays before, I've never NOT had my mom there in some way (if not physically then she was at least a phone call away). When it was time to make the gravy, for instance, we had to call my mom's sister to ask exactly how mom used to make it. Gravy was mom's specialty; no matter where were at for the holidays, mom was the master in the kitchen making the gravy. Now she doesn't even know what gravy is. Why didn't I think to learn from her when I had the chance?

Our family holiday dynamics are changing. They are changing rapidly. Judging by the progression from last year to this year, I daresay this could be the last holiday season that she is even remotely aware of what the holidays are. I am trying my best to make the best of it, to enjoy the little moments. But, as it seemed for Thanksgiving, those moments may already be gone.
Posted by Cassandra at 1:26 PM

Email ThisBlogThis!Share to TwitterShare to FacebookShare to Pinterest
Labels: holidays with dementia, Thanksgiving