Today we celebrate dad’s 53 years of life. Although most of our celebrating was yesterday. We kept it simple this year by going out to dinner at the Spaghetti Factory (without kids!!) and going back to dad’s house to play our favorite family card game: Scat. Dad has been itching to get a group together to play Scat for a while. What better time than his birthday? To help us celebrate, dad’s sister and husband came,  my brother and sister came with their spouses and our family friends, the Klamms, also joined us.

Mom still remembers important dates, such as birthdays and anniversaries, so she knew dad’s birthday was coming up. I prepped her days in advance that we would be going out to dinner to celebrate. Knowing mom’s rigid routine, we planned to leave early (I told her we would swing by and pick them up at 5:00) and dad chose the Spaghetti Factory knowing that at least one of mom’s favorites was on the menu: tortellini.

Of the few foods mom loves to eat, tortellini is among them. But not just tortellini…she must have her frozen mixed vegetables smothered in ‘Smart Balance’ and garlic. Lots of garlic.

Last Monday I told mom where we were going; she couldn’t remember The Old Spaghetti Factory. I described the restaurant to her and explained that they had her favorite tortellini there, but she still could not remember. And she was concerned about what foods they would have there that she would like. Later that same morning, as were shopping in Target, mom went down the refrigerated food aisle and pointed out the “same kind” of tortellini that she loves to buy. I took that as my golden opportunity to explain to her that the package she was pointing to was exactly the kind of food that would be at the restaurant for dad’s birthday. A couple rounds of repetition and mom understood what I was saying.

Saturday morning, I called mom to remind her about dinner that night. She remembered and was prepared to go.

No sooner than I pulled out of my driveway, at 5:04 pm, did I get a call on my cell phone from mom.

“Cassandra, I thought you said you were coming to get us at 5:00. It’s getting too late for dinner and I need to eat, we need to go. Are you coming?” she said, hardly pausing to take a breath.

“Are you coming down my street now? Are you at that stop sign place now? Where are you?”

I firmly, yet calmly, told her again that I would be there very soon and that I was going to hang up the phone. A couple minutes later, we pulled into the driveway to see mom’s face peering out the curtains at the living room window. I walked in to let my dad know we were there (as if my mom wasn’t going to let him know!) and mom pushed us out the door, complaining that,

“It’s getting too late for dinner.”

I felt a bit uneasy as I watched mom walk out the front door with a plastic bag. A quick peek inside the bag confirmed my suspicions: a container of mixed vegetables and a can of diet Root Beer.

We’ve had this problem before: mom trying to bring her own food into a restaurant. A couple years ago we took mom to her favorite steak house and she brought out her own can of Root Beer and started pouring it into a cup. The waitress told her she couldn’t bring in her own drinks and mom carried about her business, pouring the soda, not seeming to hear a word she said. We tried to tell mom that she couldn’t bring in her own drink and she became a little hostile with us, insisting that she could too bring her own drink because they didn’t have anything she liked. This incident was before her diagnosis, so weren’t quite sure how to handle it back then (it was at the time that we were suspecting her behavior was due to brain damage from her surgery). In the end, the waitress had let her keep her soda, but let us know that it would not be allowed in the next time.

I was nervous about the confrontation that would likely ensue at the restaurant. Not only was she bringing in a soda, but mixed vegetables! This wasn’t going to be pretty.

We conversed in the car-my brother, Joe, his wife, Natalie, my dad, husband and myself-about the situation. It was decided that it might be best to just explain the situation to the hostess or waitress when we arrived at the restaurant and hope that they would be accommodating. I felt skeptical.

After we checked in and everyone took a seat in the lobby while they prepped our table, I approached the host and explained the situation. He told me he would need to consult with his manager.

Great. My nerves took over as I stood waiting for the manager to come up. I didn’t want a confrontation with my mom. I didn’t want to put a damper on dad’s birthday. I wondered if we should have just tried to sneak the food in (the problem with that is that mom is not very inconspicuous about it).

The manager came to the front desk and my Aunt came to my side in support. It helps that she’s a nurse. I figured I could try to use that to my advantage if needs be…she assured me they could not discriminate her disability. I felt more confident with her by my side.

I first told the manager that we were there to celebrate my dad’s birthday, and then I explained that my mom had dementia and that with this dementia comes certain obsessions. One obsession is her food. I told her that mom planned to order the tortellini but that she must have her mixed vegetables to go with it. She also has to have to her Mug Root Beer, which most restaurants do not carry (she despises Barqs Root Beer). I told the manager that we tried to talk her out of bringing food in, but that she lacks comprehension of what we are telling her.

For a minute, I thought she was going to turn us away. But relief soon swept over me as she said,

“That is not a problem at all, don’t even worry about it. You don’t ever have to worry about that at all when you come to the Spaghetti Factory.”

Confrontation averted! We thanked her and went about our evening, enjoying dad’s birthday dinner. Mom happily dumped her veggies onto her plate of tortellini, giving it a good stir before devouring it in minutes.

I even got a picture of mom and dad. I have to say, this is one of the best pictures I’ve gotten of them over the past several years. I think mom looks quite pretty and more like herself than I’ve seen in a very long time. 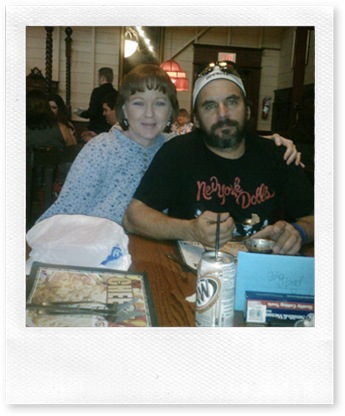 I just want to say, one more time, HAPPY BIRTHDAY to my awesome dad. The past few years have been really hard for our family, beginning with the loss of my grandparents…then the diagnosis of my mom. The past couple months have been especially difficult for our family, due to other circumstances. Losing my mom has been gradual over the past few years, but each day seems harder and harder and she slips away more and more. And I know the person who suffers the most is my dad. I hope that he was able to enjoy himself for all of his birthday festivities. And I am also very glad that mom was able to be there with us, even with all her quirks!

Posted by Cassandra at 9:31 PM