Mom has been asking me for weeks now to take her JC Penney. She wants to buy my little guy an outfit for his birthday. I think the real motive for wanting to go to the mall was to stock up on some more Bath & Body Works lotions and sprays. Mom has an obsession with those bath gels and lotions. Her bathroom cabinet is FULL of them...seriously. FULL. There is no room for any more. It's been somewhat of pain for my dad as mom keeps stock piling more and more body products that have taken over not only all of the cabinet space, but now the counter as well.

The last time we all went to the mall together (about a month ago), mom tried to sneak off to buy more body products. Dad caught her though, and she didn't make her getaway to Bath & Body Works fast enough. She's been scheming to get there ever since. Dad eventually told her that she could buy some more of her "favorite kinds" of bath stuff if she agreed to get rid of some of the old stuff. Whether she understood that part of the deal or not, what she heard was that she was allowed to get some body gels!

Due to sick kids (and sick self), I haven't been over to mom's house the past 2 Mondays. I decided I'd make it up to her and take her out on a week night. I wasn't sure if she would resist, since she has a very strict routine of bed between 8 and 8:30. But she really wanted that body stuff, so she agreed to go after dinner last night.

My dad brought her over shortly after 6:00 pm. No sooner than he stopped his truck did mom excitedly hop out, with a huge grin on her face, ear to ear.

"I'm so happy, thank you for taking me and I have my bag here too for that store, what do you think I should do first? Should I go to pick out your son a toy or clothes or should I go upstairs first and go to that Bath store or you could look for something and I'll go upstairs and then I'll come back to you..."

On and on she went for the next 15 minutes in the car, incessantly chattering about how happy she was, how good it is for her to get out and shop (she used to go places all the time when she was a driver), asking what order we should run our errands in, and occassionally talking about memories of her childhood as we drove past memorable landmarks. I could hardly get a word in edgewise and if I did, she didn't seem to register what I was saying. But I was content to let her ramble; I was just glad that she was happy.

We pulled into the parking lot and mom, in her usual fashion, took off out of the car, racing upstairs to Bath & Body Works as if she was running a marathon! At one point I told her she was walking too fast and asked her to slow down. She responded with,

"No I'm okay. It's really good exercise for me to walk like this too."

After practically sprinting past all who stood between us and the store, we reached mom's destination. Each time she goes to Bath & Body Works, she brings her own bag from home-one that she has saved from the store a long time ago. I tried explaining that they will give her a new bag each time and she didn't need to save it, but she really wanted that bag. Hey-it saves the environment, right? ;) 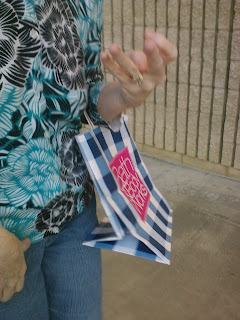 Mom pulled out her list where she had written down the names of the scents that she loves. A couple have been discontinued but she found the other two scents which were sitting next to each other on the shelves. She held the shower gel and lotion in her hand, carefully studying the words on the label to be sure that was the item she needed. She was a little confused between the bath gel and the shower gel, and I confirmed to her that it was the shower gel she wanted. She didn't believe me and so she pulled out her glasses to read the label more carefully. She became confused when it came time to pick out the body spray. An associate who worked at the store came over to check on us. Mom wasn't responding to her offer to help, so I explained to the nice woman that mom was looking for the body spray. She explained to me that the packaging had changed but what mom held in her hands was indeed the body spray. I tried explaining this concept to mom. She wasn't catching on.

"Why does this say Bath & Body Works here too? That makes it sound like it's for the bath." 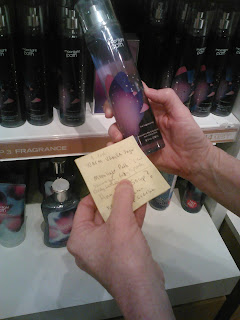 Whew, I thought. We're done! Not quite! Mom had only selected one of her favorite scents and she needed to choose her very favorite scent next: Warm Vanilla Sugar. 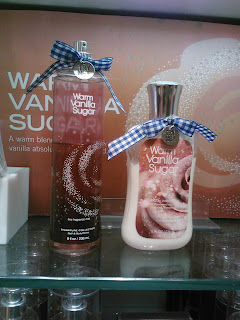 On and on we went again, sorting through lotions, bath and shower gels and body sprays. When she found exactly what she was looking for, she placed 3 of everything in her bag.

"Mom, I don't think you need 3 sets. That's a lot of money you're going to be spending," I said, suggesting that she buy only one complete set of the Warm Vanilla Sugar.

"No this is really good and I need it too. I use it so much and yes I need this too and I got this gift in the mail too," she argued, waving a 20% off coupon in front of my face.

We made our way to the front counter and mom took all of her loot out from the bag. In total, she had 4 shower gels, 4 body sprays, 5 lotions (one was a free gift for buying so much) and a travel sized lotion (which was a gift as well). I was becoming increasingly anxious at this point because I knew my dad was not going to be thrilled with the amount of unnecessary body products she was buying. And I was wondering how she was going to pay for all of this. She pulled out her coin bag and I saw a stack of $1 bills and one $5 bill.

"How much money do you have there mom?" I asked. "It doesn't look like it's going to be enough for all of this."

Mom very slowly counted her money, one-dollar bill at a time. She had $27. The grand total of her purchase, with her coupon, was $86.

"Mom, look at everything you have on the counter. You have more than 12 bottles here. Do you think $27 is going to be enough?"

Mom dumped some change into her hand.

"Tell me how much that is and then add this," she instructed the sale associate. "I have that other card too," she told me, referring to her credit card (which I wasn't certain dad wanted her to use).

I felt a little panicky; I wasn't quite sure how to handle the situation. I called dad, who (as suspected) was not thrilled about her attempted purchase. He told me to try and get her to put some back, but "if she makes a scene about it then let her get it and we'll deal with it later."

Deal with it later: this means that mom won't be allowed to go to Bath & Body Works for a long time. Dad thinks that she has to learn to do what we tell her to or else there are consequences. This is the perfect approach for a child. And since mom is very childlike, it seems logical. Unfortunately, mom is not teachable with this disease. I told my dad (later on that night) that the best approach is to limit her access to the money. The cards need to be taken away and she needs a cash allowance. It's complicated; it's not as simple as it sounds.

Back to the counter: I tried to coax mom into putting some of the Warm Vanilla Sugar sets back. The sale associate (who was wise to the situation) told mom that she would hold it for her until she came back "next time." I told her it would be there for a long time, why not come back and get it when she runs out of it? No amount of convincing would do for mom.

"No, I can get all this. I need this, no." Then she turned her face from me and glared at me from the corner of her eye, adding, "You guys need to just quit picking on me!" as she pushed all of the products forward to the associate.

I stood by and let mom move forward with the purchase, swallowing the lump in my throat. How did we get to this point? It just doesn't make sense that I would have to stand by and watch my mom-a grown woman, the woman who raised me and taught me all I know-struggle with a seemingly simple concept such as how much money it takes to buy an item (or 12). It is hard to reverse the roles and have to act like a mom to my own mother. And even harder because somewhere deep down she senses what is going on and feels like I am disrespecting her. It breaks my heart.

After paying for her abundance of body products, mom swiftly led the way out of the store and back down to JC Penney. She wandered around the kid's sections; I'm not exactly sure what she was looking for. But it was obvious that she wanted me to select something for her to buy for my son. I chose an outfit and we were on our way. I wanted to go to the Children's Place to buy my boys some much-needed summer clothes. But mom became anxious at the mere suggestion and took her phone out of her purse to check the time.

"It's already getting so late, oh my gosh it's already 7:30. I need to be home. It's not good for me to be out so late and I have to be back by 8:00 for getting ready for bed and other things too." [By other things, she means medicine time].

I knew it was a battle I would surely lose, so instead of shopping for my boys, we made our way to the car. I decided I could go shopping another time; it was more important to end the evening on a good note. And mom was happy.

Email ThisBlogThis!Share to TwitterShare to FacebookShare to Pinterest
Labels: obsessions, shopping with dementia