We've been experiencing some warm weather here...and it's barely just spring! It's been in the 80's and 90's and mom still insists on wearing her thick, fleece jacket for every second of every day. It's gotten to the point where she has even been sleeping in it. She cannot make the connection between her severe sweating and her jacket. Needless to say, it is a concern for us when she goes on her walks in this heat. She ends up extremely hot and sweaty and refuses to drink water; we are afraid she will overheat herself and pass out. Try as we might, we cannot peel that jacket off of her!

My dad decided that the jacket needs to disappear. He was able to take it away one day, either when mom was showering or when she was changing (I'm not sure which). Of course mom has been frantically searching for her jacket and quite upset that my dad "lost" it. Not to fear. She has found ways to improvise. Each day, we find her with something new worn over her clothes in place of the lost jacket. It might be a dress, dad's t-shirt (worn inside-out and backwards) or dad's jacket. But mom is resourceful and creative! 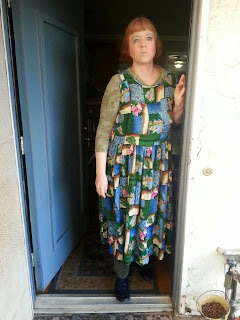 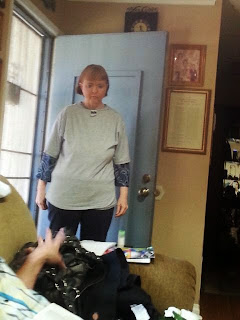 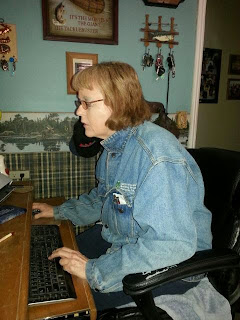 Posted by Cassandra at 11:07 AM No comments:

After my last post, I wrote a post in my (facebook) FTD online support group. I was seeking advice on how others have handled these kinds of situations, since I know that night waking is very common in dementia. Several people on the post suggested that confusion and disruption such as this could be a sign of a urinary tract infection. Who would've thought?? Never in a hundred years would I have thought that mom's schedule confusion could be attributed to a UTI; she had no fever and no other sign of being sick or in pain. Nevertheless, after reading all of the comments and suggestions, and reading up on signs of UTI in a person with dementia, I decided we needed to rule out the possibility.

The problem is...how do you get a person to go to the doctor when she thinks it is night and refuses to get out of bed? Add on to that my dad is overwhelmed with work right now and is shorthanded and all of my kids are home on spring break! After some investigation work (and thanks to a conversation I remembered having a few weeks ago with a friend about a home test kit for UTI's), I made a trip to the pharmacy and found a home kit for UTI's. Of course I knew I wouldn't get my mom to pee on a strip for me, so I bought a pan to go underneath the toilet seat.

At 6:20 pm, I returned to my mom's house (from the pharmacy) and put the toilet pan on her toilet. I went to her bedside and prompted her to get out of bed and go potty.

So, as you can guess, attempts to get her to the toilet failed. That is, until it was 6:59. On the dot, mom got up, used the toilet and I pushed my way in to test the strip before she caught on that something was weird in the toilet (she had no clue). A couple minutes later, the test strip read positive for a UTI. My dad emailed her doctor and we made plans to get her into either his office or urgent care for today.

Fortunately for us, her doctor read my dad's email early this morning and sent in an order to the lab for a culture test. Since the culture will take a couple days to process, he prescribed an antibiotic for her to take in the meantime. A quick trip to the lab and I was able to get her a cup; another quick trip to the pharmacy and I got her antibiotics. Though she was already tucked in bed when I made it back to her house, I convinced her to take both the antibiotic as well as some Tylenol (she is feeling a little warm now) by telling her that it was a sleep medicine. The only problem now is waiting for her to get out of bed this "morning" (which is really 6:59 this evening) to go potty and collect her urine sample.

What would we have done without this support group? We would've never known...until it turned into something more serious. UTI's, if left untreated, can result in blood infections and can be life threatening. Hopefully we caught everything in time to avoid anything else too serious. I am hoping that once the infection is gone, she will be able to get back into her regular routine and her confusion will be lessened. I suppose only time will tell.

Posted by Cassandra at 1:25 PM No comments: