One question I get frequently is,

"How is your mom's progression? Does it seem to be a consistent downward slope or does it plateau before going down again?"

I used to think she was traveling a continual downhill slope; her progression seems fast at times. Six months ago she definitely seemed to take a quick turn downhill. Practically overnight, we had to transition her to diapers full-time due to the daily accidents she was having. She was eating less, sometimes going hours at times without fixing herself a sandwich. She even had a couple of incidences where my dad found her on the floor, unable to get up on her own. I thought the worst was quickly approaching and I had a terrible pit in my stomach for what was lurking around the corner. However, things seemed to have plateaued since then. There have still been slight declines in almost every area, but not the full downhill slide that I was expecting. In fact, in some ways things have improved. For example...the summer presented so many diapering and poop issues. I won't go into detail, but suffice it to say that those issues are not arising at the moment whereas in the summer it was a frequent (and sometimes daily) occurrence. I know it could change again tomorrow, but for now we are counting our blessings!

So here we are, at the start of 2017. I like to give a full update each year (sometimes twice a year, if I'm really on the ball). Comparing the last year to the present year always puts her progression into perspective. This is what Mom's stage is looking like as of right now:

LANGUAGE: The only real recognizable word is "Bud". She attempts to say my name; it comes out as "Cuh-suh-suh-suh". Every now and then we might pick out a familiar word, but she mostly speaks gibberish. There are some repetitive "words" that she says daily, but we aren't really sure what those words are. Sometimes we can figure out what she's saying by her gestures.

HYGEINE: She no longer brushes her teeth. On occasion, she will pick up the toothbrush off the bathroom counter and swish it in her mouth for 2 seconds before briefly running it under a quick stream of water and returning it to it's place. Her gums are very red and swollen and her teeth have seen better days. I picked up an electric toothbrush for her about a month ago and started brushing her teeth while she's in the shower; she doesn't remember to spit out the toothpaste. She cries the entire time I'm brushing, so I try to keep it brief. I'm not sure how much difference it's really making at this point, but at least we can say we've tried. When it comes to brushing her hair, she used to allow me to brush it for her while she pat her face with a make-up sponge (going through the motions of putting on her daily make-up). She no longer makes an effort to put on make-up and won't stand still long enough for me to brush her hair. I usually follow her to her bed after she's clothed from her shower and try to quickly brush her hair before she swats my hand away and lays down. The other day I was able to cut her hair again (it had to be done quickly, in the one minute that she sat down to eat her pb&j) and the shorter length does help with the hair washing and brushing.

BATHING: She does not participate in any of her own bathing. Six months ago she would hold out her hand and at least rub the shampoo onto her hair. She might do that every once in a while, but for the most part shower time consists of me getting her in the shower and her fighting me to turn off the water the entire time. Sometimes I try to sing to her and distract her a little bit; if I'm lucky she'll give me a grin but she really hates being in the shower these days. We have a system: I rinse her down, she turns off the water so I then wash her down with soap (while she tries to get to the towel on the other side of the glass). I then turn the water back on. I rinse her off, she turns off the water and then I quickly get in to brush her teeth, followed by one last rinse off. The whole while she is usually crying; this is relatively new. She really hates showering. I always feel so bad when she starts crying, but it has to be done. When I'm finished, I then pass her a towel but she doesn't dry herself off. She grabs the towel and then attempts to put it on the floor to stand on (despite the fact that I already have a towel laid down on the floor for her). I dry her off, top to bottom, and I get her clothes on her. She will hold up her arms for her shirt and help pull up her pants.

TOILETING: Mom is in diapers full-time, mainly because we never know when she's going to end up wet. She does use the toilet still, interestingly enough. But she usually wakes up with a full diaper in the morning and is wet by the end of the day.

EATING: Mom's been on her pb&j kick for quite some time now. The most significant change within the past 6 months in terms of her eating is that she longer drinks her Ensure. Now she is on a 100% pb&j diet. My dad gives her vitamins with her meds and she only drinks water.

ROUTINE: I remember when her routines were such a headache for us because we could never get her to stray away from it; she was so rigid and so unflexible. She wouldn't even take a pill one minute too soon! She no longer has a schedule but she has a routine of sorts and it usually runs in 20 minute cycles. All day long, she makes a circle from her bedroom to the kitchen to make a pb&j sandwich, to tapping her plastic medicine dish on the counter for medicine, to banging on the front screen door to get out, to looking out the window, to going back to her room to lay down. As she makes her way down the hallway, she tries opening every door along the way. We've had to add baby locks on the bathroom door (because she was getting into the soaps and rubbing them on her face) and dad now locks the office because she was pounding on the computer keyboard, which was messing up the computer. Once she lays down, we may get a 5 minute break (sometimes longer if we're lucky!) and then the cycle starts again. If the weather is nice and we are able to take her outside, it helps to settle her down as she sits on the patio and watches every passerby. We've had a lot of rain this winter, so she hasn't been outside much which has added to her stir-craziness. She rarely tries to go for walks anymore and she doesn't ask to go to Ellen's (this is all new within the past 6 months), although I suspect she might be trying to ask to go to her sister's house; it's too hard to understand anymore. Since she wants to make pb&j constantly (and usually only takes 1-2 bites out of each sandwich she fixes), we cut the bread into quarters for her now to cut down on waste. If her dish banging becomes too much to handle, we slip some Jelly Belly jelly beans into the dish and she swallows them as if they are medicine. So I guess I lied when I said she's on a 100% pb&j diet...she gets those jelly beans in there ;) She does wind down at night, but still gets up several times during the night and goes about her routine, which makes for lack of sleep for my dad. But he never complains about it. He just does what he has to do (and I have no idea how he does it!)

There you have my bi-annual report on mom and her progression. Like I said, she has, for the most part, plateaued over the past 6 months. But things don't last for very long with dementia. The scary part is thinking about what the next downhill slope will bring. She is so advanced in the disease that the next big hurdles to face are issues with choking and swallowing, mobility, complete incontinence and muteness. I wish that she'd never have to go through any of that. Every decline breaks my heart more and more. :(

Here are a couple of recent photos of mom, taken on Christmas. It was a Christmas miracle that we got her looking (and even smiling!) in the direction of the camera! 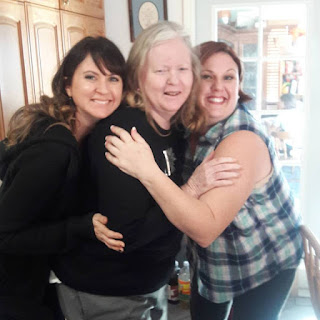 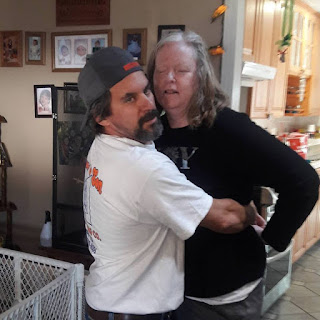