Last summer, Mom experienced a significant decline and it got me a little bit worried. With every rapid decline, I can't help but to wonder if this is the turn that is going to lead us to that final stage. I could write all the details of what transpired, about our evaluation for hospice and home health care, but it's a long and exhausting story. To sum it all up in a nutshell, some members of my support group suggested that we get her a hospice evaluation claiming that their loved one received hospice much sooner than the phase my mom was in at that time. I kind of got my hopes up; not because I wanted hospice necessarily but because I thought we might actually be able to get some (free) outside help. Well, after the evaluation, it was determined that she was not eligible for hospice yet, even though she did fit some of the criteria. One of the biggest factors, they told me, was weight loss. Significant weight loss indicates that their eating habits are changing; at the end stages of the disease, weight loss will occur, signaling the advancement of the disease.

This left me a little confused. For one thing, in everything I've read up about semantic dementia, it says that weight gain is very common in the late stages of the disease. Mom was at her all time heaviest weight, weighing in at 234 pounds. Her average weight (at nearly 5'8") has always been somewhere between 150-160 lbs. Nevertheless, Mom's eating habits were changing. Some days she'd eat hardly anything at all; other days she would devour 6 or 7 pb&j sandwiches. She was still drinking Ensure though, which is packed full of calories. The hospice nurse recommended that we keep track of her weight and her eating, stating that we could call back for a reevaluation at any time, and especially if we could show changes in her eating patterns and weight loss. So, for the next few months, we kept a log of the times and the quantities of Mom's meals.

After a couple months of doing this, we didn't really see much of a decline (especially in weight) so we decided to quit tracking for a while. The last time I weighed her was early fall and not much had changed. BUT, since that time, Mom has quit drinking her Ensures. Dad has left them out for her on the counter and has even tried personally giving them to her, but she won't drink them. She will only drink water from a plastic water bottle and she is now on a 100% pb&j sandwich diet. We generally only make 1/4 of a sandwich for her at a time because so much of the sandwich ended up going to waste. She was taking one or two bites and disposing of the rest and she will not eat leftovers. She has to watch it being made if she's going to eat it!

I've noticed her slimming down a little bit over the past few months, so today I decided that I should get her on the scale-just to note the changes. Our caregiver was at the house with me when I showered her so she helped me to get Mom on the scale afterwards. This is no easy feat; Danielle had to pick up her feet and move them onto the scale while I held onto her upper body. I was shocked when I read the scale. In fact, we put her back on two more times just so I could make sure that we read the number right and that it wasn't a mistake. All 3 times, her weight came in right around 183 pounds; 50 pounds less than she weighed in the fall!

I am understanding more now about the weight gain/weight loss issue in the last phases of the disease. While those with semantic dementia do tend to gain weight in the later stages of the disease, there is an order to that very final stage that I am finally starting to comprehend. As one enters into the very last stage, there comes a disconnect between body and mind. The body forgets how to eat, how to swallow, how to walk, how to talk, how to hold in human waste. We've seen some of these changes already, but we still have a ways to go. I do think it's time to start tracking her weight again. It's possible we could now get her qualified for hospice, although she could still have a long way to go-there's no way to know for certain how long this phase will last. When she begins to have more trouble with her mobility or complications with infections (pneumonia, UTI's), etc., then I think an evaluation will be in order. Until then, we take it one day at a time.
Posted by Cassandra at 2:50 PM 10 comments:

Lately, Mom has a bit of a shoe fetish. When she was in moderate stages of the disease, she used to be OCD about laying out her clothes for the following day, shoes and socks included. She'd also place her pajamas on the footstool that sat in the corner of her bathroom/vanity area. The obsession has continued, even though she no longer changes her clothes by herself anymore. I think it's just the motion of doing it; she remembers that she has to put clothes in the corner but she doesn't remember why she does it. 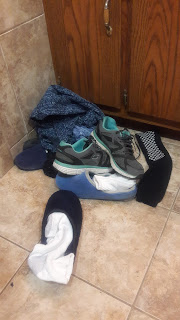 The thing is, Mom is not only laying out her own clothes and shoes. She collects dad's shoes and whatever shoes she can find throughout the house and puts them in her corner. There have been several occasions where my, or other family member's shoes, have gone missing. When that happens, we know the first place to look: Mom's corner. And sure enough, that's where we find them! One day, not long ago, I actually had to hide my shoes because she kept coming out to the living room to retrieve them and take them back to her room! It gives us all a good chuckle.

Sometimes, Mom will actually attempt to wear the shoes she collects. Last week, I heard heels clacking down the hallway as Mom made her way out of her bedroom. The sound made me raise my eyebrows and I laughed out loud when she made her grand entrance wearing my dad's church shoes. 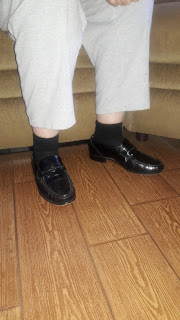 Sometimes, with all the sadness that dementia brings, you've gotta find things to laugh at. I know as we look back on memories with Mom, her shoe fetish will always give us a good chuckle!
Posted by Cassandra at 10:06 AM 2 comments: