I've always tried to be very open with our journey on this blog, sharing every part of it; the good, the bad, the ugly. The other day I realized that I have been holding back a big part of my journey with dementia. Why am I doing this? I don't really know, but I suppose a big part of it is fear; mostly fear of what people think.

I have mentioned The DEANA Foundation on here before, but I don't mention it often. I think a big part of that is because I don't want to come off as though I'm trying to advertise or "sell" something to my readers; that isn't my intent with this blog. With that said, the foundation has become a huge part of my life and a big chunk of this journey and I feel that I'm not being authentic by holding back and not talking about it. The truth is, I spend a portion of nearly everyday contributing something to the foundation, whether it's phone calling, making presentations around the community, working out details on events, etc. Some days, I feel like I am crazy to have started all of this while in the midst of caring for my mother and my young family. There are moments when I question myself if this is what I should be doing and focusing on. There are moments when I feel very inadequate, like I am a tiny fish in a giant pond. There are moments when I want to throw in the towel and quit (not gonna lie). Yet, there are other moments when I feel like I was definitely meant to carry out this work, especially when we are able to award grants to help families that have nowhere else to go. It gives me a positive direction to channel my emotions and it is a way of honoring my mom. While at these events, I'm able to talk about her, talk about what we've been through while trying to make a change within a broken system. I feel that in some small way I am making (or attempting to make) lemonade out of the lemons we've been given. That is becoming my new mantra for life: making lemonade out of lemons!

For those who aren't up to speed on The DEANA Foundation, you can visit our website to learn more, but basically our goal is to raise money to help middle-class families (since they are the ones always left behind) with caregiving costs associated with dementia. We do this through donations, fundraising and hosting events.To date, we have been able to help 3 families in our community with our grant program. We have done so much over the past couple of years and have many great things in the works right now, so I'm optimistic that number will continue to increase each year. 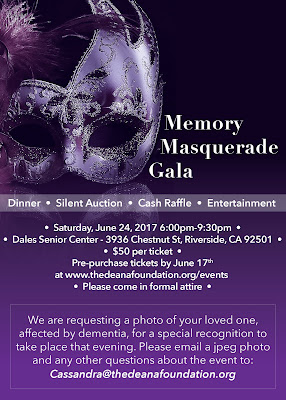 Right now, we are planning our first annual Gala fundraiser, which we've given the theme of "Memory Masquerade". The goal is to raise money for the foundation, which we award as grants to families who need help. This will be our biggest event so far and is going to be a beautiful evening; our guests will get dressed up and enjoy a nice, catered dinner. We will have a photographer there taking photos and we are having a silent auction, which we've gotten some amazing items donated for (including a helicopter ride, an autographed copy of Kimberly Williams-Paisley's book as well as an autographed copy of "Still Alice", lunch with the Mayor, themed gift baskets...just to name a few of many fabulous things we are auctioning off...and the donations are still rolling in!). We'll have some entertainers throughout dinner and a guest speaker is coming from The Alzheimer's Association. We are also planning a very special tribute for those affected by dementia. I don't want to spoil the surprise of everything we are doing, but we are making some lovely, meaningful keepsakes for caregivers to take home and will also have a special presentation dedicated to all of those affected. Given the fact that this foundation wouldn't exist were it not for my mom, we are paying her a special tribute as well, which gives meaning to me and my family on all that we are doing. I'm really excited about the evening but if I'm being honest it has brought a bit of anxiety as well. For one thing, it's been a lot of work and at times it is overwhelming. It consumes my thoughts and I'm constantly second guessing myself. For another, I'm so afraid of failing. With all of the hours that I and my volunteers have put into this so far, and all of the emotion and energy and focus we have given- I don't want it all to be in vain. Nevertheless, I am optimistic that the evening will be a success and that this work will move forward! When I sit back and look at what we've been able to accomplish this far, I am proud of our work and feel motivated to keep pushing along, hard as it may sometimes be.

Even though I don't speak of it often on this blog, know that the foundation is still plugging along! It grows stronger with each passing year and I feel like we are finally gaining momentum and heading in the right direction.

Today marks exactly 5 years since my dad took mom to UCLA and received the dreaded diagnosis: semantic dementia. I remember it like it was yesterday; the tears in my dad's eyes as he delivered the news that night while standing in his kitchen. The struggle to understand and come to terms with what the diagnosis meant. The grief, the anger, the acceptance (still working on that one). The course of my and my family's life was altered drastically that day. The past 5 years have brought about the greatest heartbreak and deepest challenges of my life. Yet, I know that the worst is still to come.

Five years ago, I wouldn't have guessed that Mom would still be with us today. According to the pamphlet that UCLA sent home, the average duration of FTD is around 7 years (at a follow-up appointment, the UCLA doctor told us the average for semantic dementia is 12 years, though it's different for everyone). Although it's hard to know exactly when this all started for Mom, we can trace signs back as far as 2007. By late 2009, we knew there was definitely a problem. That means that, while it's been 5 years since diagnosis, Mom has been dealing with this disease for 8-10 years now.

At this point, she is in the later phases of the disease, nearing the last stage but not quite there yet. Cognitively, she is very late stage, but the final phase brings about a disconnect between body and mind; the mind stops telling the body what to do (walking, talking, swallowing, eating, etc). Mom is still ambulatory (mobile) but I believe we are starting to see swallowing issues now. I would say that a majority of the time that she eats and drinks her water, she ends up coughing on the water. She isn't completely chewing her food either. Sometimes when she coughs, she will spit out chunks of her sandwich. A few times, she has coughed so hard that she's thrown up and we've seen the same issue with her partially chewed food. Other times, remnants of her food remain in her mouth and she doesn't swallow it all. Luckily, all she eats is pb&j and that is pretty soft going down and dissolves after being in her mouth for a while. If she were eating meats or vegetables this would be much more problematic.

If I'm just being completely honest here, it's a blessing and a curse (maybe curse is too strong of a word) that she is still here with us, 5 years later. It's a blessing because we've had time to make preparations and process what is to come-although I don't know if I will ever be fully prepared for "the end". It's a blessing to be able to serve her and care for her, even though she may not understand it now; it is a growing and learning experience for all of us. This has stretched me in ways that I didn't know I could be stretched. It's a blessing because she is still here physically to hug and love on (even though she pushes us away, lol), to say I love you to, to remember. I think one of the things I fear when she's gone is that people will just forget her. The hard part with this disease dragging on is watching her suffer and lose all quality of life, watching her forget everyone around her, watching the tears as she struggles. It's hard to see my dad go through this; I know he struggles but he handles it like a champ. He doesn't ever complain about her, even when he's up 20 times a night with her (no joke!) In fact, just last night we were talking on the phone and he told me that if she wants to get up 10 times a night and fix sandwiches or look out the front door, he'll get up with her 10 times a night and he will re-tuck her into bed just as many times. "One day I will miss it," he told me. His strength, love and dedication is a great lesson to me (it brings tears to my eyes just thinking about it). [He is probably going to be embarrassed that I write this, he is very humble and doesn't see himself as the inspiration that others do].

Five years goes by in a blink. I'm fairly certain that we don't have another five years with her; I'd be surprised if we have two (although I never thought we'd make it this long!) But as long as she is here, I will continue to love her and care for her to the best of my ability. Like my dad said, one day we'll miss this.

Below are pictures of her progression, from before diagnosis and then from 2010-2016. 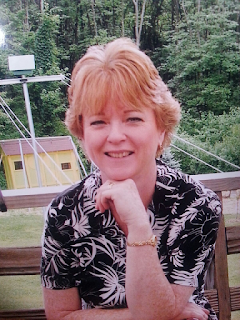 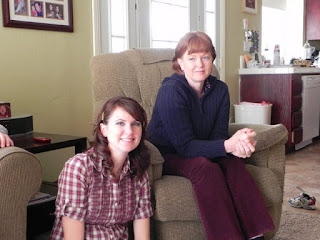 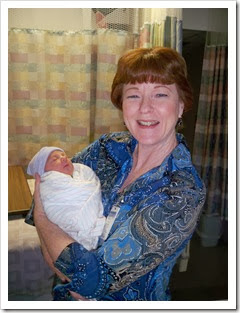 2011-a year before diagnosis 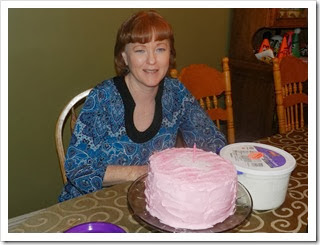 2012- her birthday, the year she was diagnosed 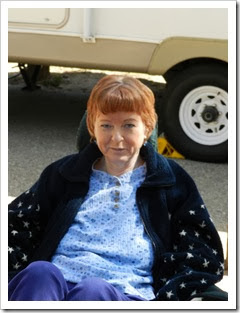 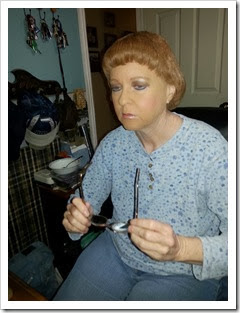 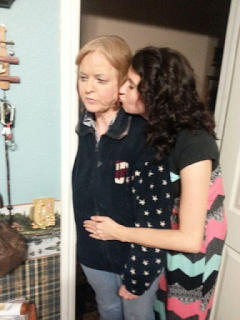 2015-the best picture I could get for Mother's Day 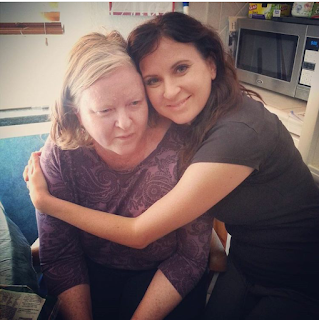 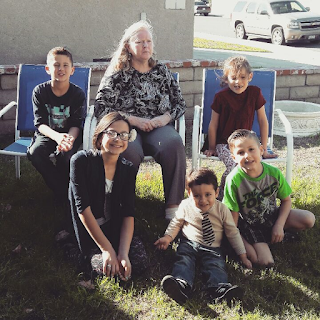 Not quite 2017, but close enough (taken at Thanksgiving)