As mom's disease progresses, her routines and rituals continue to change. One week, we have things figured out. The next week, everything is disrupted. One thing that we have learned with this disease is how to be resourceful. Sometimes you've got to roll with the punches and take it one day at a time.

For so long, mom was so strict on her daily routine: wake at 8 am, take medicine at 8:30, go to the bathroom at 8:35, eat breakfast at 9:00, sit on the bed and wait until shower time at 10 am....you get the point. Nowadays, there's not a whole lot of rhyme or reason to her day. She still wakes in the morning (long before 8 am now) and will drink her "slim fast" and take her medicine. After that, we can't be quite sure what she will do at what time. We can no longer leave her medicines out all day for her to take at the designated times because she'll take them all at once. She doesn't shower unless dad or I force her in. Some nights, she is up at midnight, fixing her sandwich for lunch. Other times (like today) she eats her lunch at 8:00 in the morning and skipped her afternoon meal. Sometimes she'll take an hour nap, other times she'll nap for two minutes and then be up again. We never know what each new day will bring!

One of the things that has been especially helpful for us is mom's love for her computer games. On her old schedule, she spent a few hours a day in front of her computer. Nowadays, she will sit down for a few minutes and then be up doing something else before returning to the computer for another minute. She isn't spending a lot of time in front of the computer, but she is still playing a game or two of spider solitaire each day (I haven't noticed if she still plays the tile game she was playing).

So what does mom do all day? you might ask.

Well, let me tell you.

All day long, she paces back and forth from her bedroom to the living room. She walks down the hall, opens the front door and checks to see if the screen door is unlocked. When she sees that it's locked, she pounds on the door. If there is a passerby on the street, she will call out,

She bounces between the front door and then over to the couch where she hangs over to peer out the window. She notes whether or not "his" (dad's) truck is there. If anyone is outside, she will then knock on the window to get their attention. After doing this back and forth a few times, she then checks the garage door to see if she can get it open. Of course she can't, so then she usually goes back to her bed where she may rest (with the sheet over her head) for a few minutes, followed by a brief trip to the computer and then back out to the living room once again. And this is how she passes her time. EVERY. SINGLE. DAY. I'm thinking that her short term memory has greatly declined now as well.

On the bright side, she is no longer shutting herself in her room all day; everyone gets to enjoy her presence a bit more! ;) 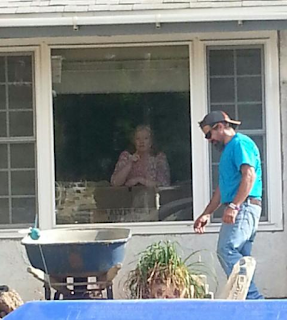 This picture was one that I took a couple weeks ago when my dad was working in the front yard. Dad was never alone while working! Mom was there, knocking on the window and calling to dad. She wanted him to put out her night time medicine and at one point she even went to the kitchen and grabbed her glass which she knocked against the window! Boy, she is persistent!

In other strange news...we took mom to the lab as part of a physical she has scheduled. She hasn't had her blood checked in a couple of years; we figured we were overdue. We checked on her lab results today, and as far as I can see, all of her numbers are in the normal range (except her LDL was a little high). I thought for sure that her peanut-butter-and-jelly sandwich-diet might reflect deficiencies or other health issues (blood sugar, cholesterol, etc) but apparently she is faring well. It's so strange to me that she can be doing so well physically when her mental capacity is severely altered. It leaves me to wonder, how long will she have to live with this disease?

I am not my mom's favorite person these days.

Not to say that I ever was. But I think it's safe to say that she liked me pretty well in the past :)

One of the things that we knew would become an issue with this disease is hygiene. This was one of mom's strong points in the earlier stages. In fact, even when mom failed her tests at UCLA, the nurse found the positive for us by saying,

"At least she still takes good care of herself and doesn't need help in the area of hygiene."

At the time, I couldn't even imagine mom needing assistance with her grooming because of her rigid routine (which included showering and toileting-at very specific times) and her obsession with her appearance. Sadly, mom has been losing these abilities little by little over the past several months. I've written a few posts about her diminishing hair and make up skills and the irregular showering. Unfortunately, over the matter of a few months, it has gotten to the point where mom will go all week without showering, until she is forced to get in. Her resistance usually accompanies complaints that she doesn't have enough make-up or a blow dryer (despite the fact that she has both). She doesn't want to mess it all up since she feels she doesn't have what she needs to make herself presentable after the shower.

My dad never complains and rarely asks for help with anything other than supervising mom. He leaves the tougher jobs, like grooming, for himself. After a hard day at a labor intensive job, I know the last thing he wants to deal with is having to forcefully get my mom into the shower. Not to mention that by showering her at night often disorients her into thinking it's morning time (which means dad gets little sleep at night!) He is out the door early in the morning, oftentimes before mom is even awake, so showering her in the morning is tough as well. I decided to make it part of my job and (hopefully) take some of the weight off of dad's back.

Over the past couple of weeks, we've implemented a new showering routine for mom. Every other day, mom gets her shower, whether she likes it or not (I would say not). Of course it isn't as easy as simply telling her to get in the shower. It was tricky at first, but I've pretty much got it down now. Sad to say, but we actually have to remove her clothing from her (she won't do it herself), much like with a little child, to cue her that it's shower time. Some days she will plop her body down on the bed and I have to pull her pants off while lifting her body (that's a good work out!) Other times I can get her into the bathroom first and remove her clothes there. Once I manage to get her clothing off, she usually protests and sits herself firmly down on the toilet, waiting for me to go away. I pretend to leave and crack the door shut; she stands back up, poking her head out the bathroom door to see if I'm gone, and that is when I take my opportunity to guide her into the shower, disallowing her to sit down again (sometimes that results in a naked bear hug as I move her into the shower!) The other day, no sooner did I start taking off mom's shirt than she lamented,

Later that day, while visiting her sister, she mumbled complaints to Ellen about how I shouldn't "see her naked or plain Jane." I know I am not her favorite person these days but that's okay. It doesn't hurt my feelings. I know that the "real" mom, lost deep inside her somewhere, appreciates all that we do as a family to care for her and keep her as comfortable as possible in her own home.

I'm not writing this post for sympathy or for praise. As much as I hate what this disease has done, I am happy to help my mom. I do not resent that [help] in the least. Neither am I doing anything that millions of other unpaid, family caregivers do day in and day out. Unfortunately, this is a part of life (I would've been happier to deal with it much later in life!) and there are many other families who suffer far worse with their loved ones. Lucky for us, mom doesn't have many of the aggression and behavior issues that many people with dementia suffer from. I don't know if it will come later on, but I'll be happy if we skip that part! The only thing I do regret is making mom feel uncomfortable. While I know that it's become necessary to assist with her bathing, I know she doesn't like me seeing her in the nude. I feel bad about it and try to look away when I can but there's really no way around it. So it goes with dementia.
Posted by Cassandra at 2:02 PM 2 comments: