Both my dad and my sister shared a funny story with me that was too good to not share with my readers. This should give you a good chuckle ;)

Last week, dad arrived home from work one evening and was greeted by mom. She was talking a mile a minute as she filled him in on her day. She was very pleased with herself for accomplishing some chores around the house.

Mom led dad into the kitchen and dad was trying to make sense of what mom was saying. He was preparing himself to find a broken dish; wondering how she would have managed to break the dish while washing it. He peered into the sink and, first, saw one plate washed and drying in the dish drainer. He then looked into the "washing" side of the sink and saw some sort of mess under the faucet. He looked a little closer, picked up the mess in his hand to inspect it further, and started to laugh. Mom had tried washing a paper plate!
Posted by Cassandra at 1:27 PM No comments:

Part of sharing this journey with my readers is passing along information that I have found helpful.

Recently, I read a book entitled "Confidence to Care" by Molly Carpenter. This book was written as a resource for families struggling with dementia and Alzheimer's. It was a very easy read, easy to comprehend and was broken in to chapters addressing different behaviors and difficulties while dealing with this disease. For somebody who has a loved one in the beginning to mid phases of dementia, this book could be quite helpful in showing what to expect in the disease. There are also suggestions on how to handle certain behaviors. I think for many people who are new to dementia or don't quite understand all that it entails, this book would be very helpful and insightful.

Something else that I liked about the book was that it gave dialogue to help guide in dealing with different scenarios. For people (especially) who are struggling to handle these behaviors, this is incredibly helpful! With that said, I think the dialogue portion is geared more towards Alzheimer's or dementias other than mom's (which is semantic). Mom's specific type of dementia makes it incredibly difficult for her to understand most of what we say to her (though it might have been more helpful in the beginning stages). The dialogue won't really help much in our specific situation.

All in all, if you are new to dementia, or even struggling to understand certain behaviors, unsure of what to expect, etc, I would recommend this book to read. Like I said, it's easy-not filled with a bunch of medical mumbo jumbo that regular people like you and me can't understand-and there are many helpful tips. You can find it here at this link and for future reference, I will also list it under my "books to read" tab at the top of the page.

Posted by Cassandra at 11:08 AM No comments:

Email ThisBlogThis!Share to TwitterShare to FacebookShare to Pinterest
Labels: book, confidence to care

What’s Wrong With This Picture?

Can anyone see what is wrong with this picture? 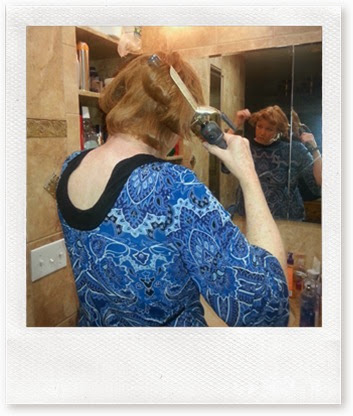 I was chuckling this morning when I walked into mom’s room and found her wearing her shirt backwards. I tried to tell her, knowing full well that she wasn’t going to understand what I was saying. So I did the only thing I could do…I showed her the tag on the front of her shirt. It took a minute to get her attention (even with me tugging at her shirt) but she finally looked down at the tag I was pulling out from the inside of her shirt and started to connect the dots…sort of.

“Oh yeah, I was gonna ask you about this if this was right,” she said, seeming unsure of how to solve the problem.

I took her arm and tried to show her that it needed to come out of the sleeve and the shirt turned around. She finally figured it out, turned it around and then went back to her hair curling. It gave me a good morning chuckle.

Part of mom's disease (semantic dementia) is obsession or fixation on certain things. One of the things she became fixated on early in her disease was going to the LA County Fair in the fall and buying earrings for my sister and picture frames for everyone; not just any ol' picture frames, but specific frames that had each person's name carved out of wood and made into a matting inside the frame. Years ago, she bought these frames with both her and my dad's names as well as each of her three children's names. Inside the frame, she inserted a baby picture of each person. She must have done this right before she was developing her dementia because it was shortly after she had done her own wall that she started buying the frames for each of her children and grandchildren. Every year a new grandbaby was born, she would wait for months until it was time to go to the fair and buy another picture frame. One year, she even became obsessed with going to the fair so that she could buy one for her sister for her upcoming birthday.

"I just put them away for the holidays mom; I'll bring them back out after Christmas," I would explain.

Even after I brought them back out, she was dissatisfied. You see, I displayed them all wrong. I used current pictures of my kids, and I hadn't even gotten around to putting a picture in my or my husband's frame. Mom would usually say something like,

"You need to put in baby pictures like I did on my wall, it's so good too. That's how you're supposed to do it."

Well...for the past couple months I've been working on redecorating the downstairs of my house. I finally figured out a good wall for those pictures and decided to do it "right", just for mom. The sad thing is, I don't know if mom will even notice them now; I haven't heard about it in quite a while. Nevertheless, I dedicate this wall to my mom and think of her everytime I look at it. What a fun idea to display all of our baby pictures! I can't wait for mom to come over to my house again and see my new wall. 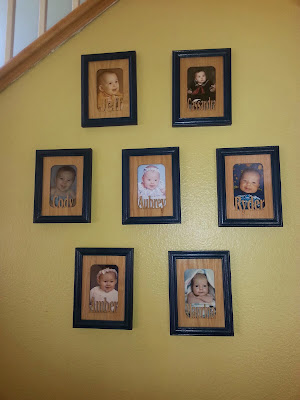 Posted by Cassandra at 3:11 PM No comments:

Last night, I was looking through some boxes in our rafters for something I wanted to use for my daughter’s school projects. I found a large ziploc bag filled with letters written from my friends in high school. I thought it would be fun to look through those again, so I brought them down with me and browsed through them while I sat on the couch watching our evening shows. I came across an envelope with my name scrawled across the front in red pen. I recognized the handwriting right away and knew it was from my mom. What a precious find!

I opened the envelope and took out the letter which, I discovered, was written to me around the time I was 15. I’m thinking that it was written and given to me at one of our mother-daughter activities at church. I sat on the couch reading my letter, tears streaming down my face, as my husband snored on the rocking chair beside me (he will deny that). I was so touched as I read her words and it made me long for my mom to return from her lost little world. 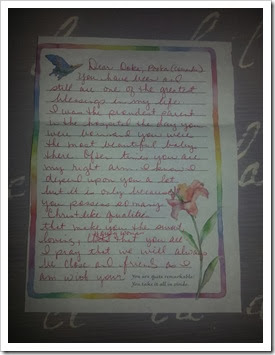 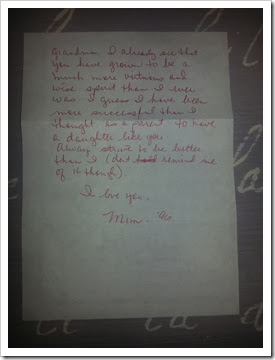 The part that hit me the hardest was when she wrote,

“I pray that we will always be close and friends as I am with your grandma.”

Oh how I long for that too!!

Is it okay to have a feel-sorry-for-myself kind of day every once in a while? I’ll pick myself back up tomorrow ;)