I have to admit, I do enjoy a little healthy competition.

Growing up, I got a taste of competition on my high school’s swim team. There is nothing quite like the feeling of winning and succeeding; of beating your own personal best (and I’m not gonna lie, beating the person next you feels pretty good too!) I was also privileged to be in an amazing high school choir “Madrigals” group. We were phenomenal (all thanks be to our amazing director…she could make anyone sing well!!) Our group never left a festival without winning first place and we were well known among our community, performing hundreds of times throughout the year. There is a sense of pride that comes with success and feeling like a winner.

Additionally, I grew up in a fairly competitive family. On holidays and family gatherings, my cousins and I would gather together and have massive gaming competitions. I’m not talking about video games; I’m talking about good-old-fashioned games: card games, word games, board games. I have to admit, sometimes sparks would fly as one person dominated the game and the others were sore at their loss. Sometimes names were even called. I was given a “special” nickname, by my cousin, for my consistent domination in the game Skip-Bo. But it was all in good fun.

When my first son was about a year old, I began selling Mary Kay. I loved what the company was all about, loved the products, and loved the competition! I’m not saying this to brag, but I won many awards for being the top seller or top recruiter in my unit. If I’m going to do something, I’m going to do it all the way!! It’s that competitive spirit that lives inside of me. Consequently, when I became pregnant with my last child, I knew I wouldn’t be able to keep up with the high goals I had set for myself (I have extremely hard pregnancies) and I decided to put my Mary Kay career on the back burner for a while. I figured I could always return to it later, when my soon-to-be-baby was a bit older.

As the past few years have gone by, I’ve had my last baby, welcomed my step-daughter back to our home full-time (which gives me 5 kids to raise…two being teenagers!) and have had to deal with my mom’s diagnosis. Needless to say, Mary Kay is not a priority right now. And I’m perfectly okay with that. My focus right now is on my family.

Last year, I felt this need to do something to help in the fight against dementia. Maybe it’s partly that competitive (or proactive) spirit inside of me. I just felt a little “stir crazy” sitting around, thinking about this horrid disease that is taking my mom from me, and I decided that I needed to do something about it. I stumbled onto the Alzheimer’s Association’s website and found that there are “walks” to raise awareness to dementia as well as raise money to fight against it. Right away I was on the phone with my Aunt, and together we joined the walk. Several family members and friends joined with us, and we formed “Team Dee”. 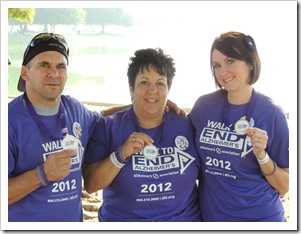 Joining the walk awakened that competitive, success-seeking side of me yet again. What can I say…I enjoy the “high”. I’m a competition-winning junkie! Ha ha. It wasn’t long before my dad, my Aunt and myself began competing against each other to see who could raise the most money. Our team quickly rose to the top of the leader board as one of the top earning family teams. The three of us went on to become part of the exclusive “Champion’s Club” for raising more than $500 for the association. It was an awesome feeling to know that I was competing and doing something for such a good cause.

As soon as The Walk was over, we started planning for the next year. We set even higher goals for our team and planned to return as the team champions. I planned to start at the beginning of the year in my fundraising efforts to accomplish this goal. I had mailed out a few letters at the beginning of the year, but then life threw us all another curveball.  With the demands of raising 5 kids, the physical and emotional hardships of losing my mom, the emotional struggles I’ve been dealing with in losing my nephew, and my own personal health issues I’ve recently faced...my head has not quite been in “the game” this year and regretfully, I am not the champion I once was. I simply haven’t had it in me to “bug” people for money and had lost the motivation to even care about fundraising. I was beginning to come to terms with this and accepting the fact that I simply will not be a champion this year, when my dad suddenly started his fundraising efforts and rose to Champion overnight [he may or may not have inadvertently stolen some of the sponsors I had already asked…but we won’t go there ;) ]

And now I just can’t help myself. The fire is lit. I have to be a Champion again. I can’t let them rise to the top without me. It is not in my nature to lose.

But let’s not lose focus in what we’re doing this for. Winning is great; competition is fun and the feeling of being a part of something bigger than myself gives me a great sense of satisfaction. But more important than the medal (which I can probably go buy at a trophy shop for $5 anyhow), is why I am walking. I walk to raise awareness, to make a statement, to stand united and fight against the disease that has ripped so much away from me. I walk to stand up to dementia, to look it in the face and say “You will not break my Spirit!” I walk to raise money for research to find a cure for this disease. The causing factor of my mom’s specific form of dementia was only discovered in 2006. At this point, there is no medication to even slow down the progression of the disease for her. Research requires money. The Alzheimer’s Association also gives to those families who are affected by this tragedy. We have been recipients of some of that money to assist our family. That gives me even more reason to walk and give back to the Association. The truth is, we may never find a cure, but at the very least we can give support and help to the families affected.

I am asking for help from anyone who feels compelled to join in this cause to fight against dementia. Any amount, big or small, brings me closer to my goal and helps the millions affected by this cruel disease. You can make a donation online by visiting MY WALK PAGE or, if you prefer to mail in a donation, you can print out a form on my page as well (all the information is on the page).

To make this a little fun for everyone donating: I am giving you a little competition as well :) For every $25 you donate, your name will be entered into a raffle. At the end of The Walk (which is in October) I will choose one person’s name (at random, in a drawing) and they will win a $25 gift card to a place of their choice!

And if that’s not enough bribery for you, keep in mind that this is also a tax write-off at the end of year. We all need those deductions, right?

Thank you all for taking the time to read my blog and a big thanks to all of those who help me in my goal.