A few months ago, I saw some posts floating around on a few Facebook Dementia/Alzheimer's pages about a new movie coming out, called "Still Alice". The movie stars Julianne Moore, who plays a 50 year old woman diagnosed with Early Onset Alzheimer's Disease. People in the dementia community are encouraging others to support this movie and raise awareness about early onset dementia. It sounded like a movie I'd be interested in seeing and I learned that it was set to release on January 16th.

I anticipated the release of "Still Alice" and had plans to see it over this past weekend. When I scrolled through my phone to view the movie listings, however, "Still Alice" was nowhere to be found! Turns out, the movie is an independent film and is showing only in a select few theatres. I was pretty disappointed. I'd been hearing great reviews of the movie and Julianne Moore even won a Golden Globe for her performance (and she's up for an Academy Award!); I was looking forward to seeing it. Instead of sitting in a movie theatre Saturday night like I had planned, I ended up in Target with my hubby and kids. I had only recently learned that this movie was based on a book so while shopping, I made a detour through the book section, and look what I found! 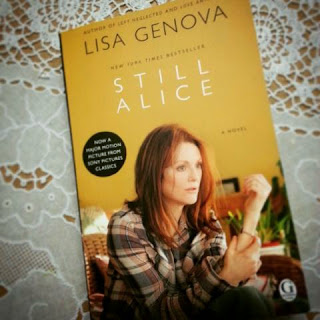 Even though I was in the middle of reading another book, I began reading this book Saturday night. And I couldn't put it down. I just finished all 292 pages this morning, less than 48 hours after buying the book. Even though I may have more of a vested interest in a book about dementia, this book isn't written exclusively for people who are dealing with the illness. It was very well written and a great read for anybody. It does give a lot of insight about the illness and the hardships that come with it, but the author delivers it in a way that is compelling; you don't feel like you are being "taught" about dementia as you read. You feel as though you are given insight into Alice's life, from her perspective, as it is turned upside down with her diagnosis. The book was powerful with raw emotion. If you are a big reader, you will like this book.

Some of you may wonder how I can read the content of this book, given my situation with my mom. It's easy: I sat with a box of tissues next to me! In all seriousness, this book gave me insight into my mom's perception of the state she's in. There were so many similarities between and Alice and my mom, but one major difference is that Alice knew she had the disease; by the time my mom received her diagnosis, she didn't know what Dementia or Alzheimer's was. I often wonder what thoughts were going through my mom's mind (and still are going through her mind!) as she began noticing her memory problems. As I read about Alice, I felt so much compassion and empathy towards to my own mom. It was also somewhat reassuring to know that, even though she may not remember a lot of things or communicate what she is thinking, there's a part of her still there that appreciates all the kindness and love we have to offer. She is still a person, maybe not the same as we knew her. But it reminded me to never throw in the towel and assume that she's too far gone to know what she wants or how she feels. When I finished reading the book, I went back to my mom's room and beside her on the bed. A few tears rolled down my cheek as I put my arms around my mom and I told her I loved her. I received no response in return, but I have to believe that even though she can't communicate a response, something is stirred inside of her.

I highly recommend this book for anyone to read. It is engaging, intriguing, heartwarming, sad of course; but it also bring awareness to the disease and teaches (in a non-teachy way) how to recognize the signs of early onset dementia. It is far more common that people realize! Catching it early on can help a lot in the management and slowing-down of the disease process for many dementias, including Alzheimer's. If you are looking for something to pick up and read, pick it up or order it on Amazon! Keep your eye open for the movie. I believe it will be released Nationwide as the Oscars draw closer.