Every time my mom sees my dad, she complains about him not being "supportive" of her. He won't give her credit cards or money, he won't give her the keys to the car, he takes away her blow dryer, he threw out her holey clothes...she's fixated on the things he won't let her do-the ways he won't "support" her and pouts endlessly about it. I feel for my dad; obviously he is doing what is best (and safest) for my mom, but it must still be hard to have to take that independence away from your spouse and be harassed about it day and day out. In fact, some things have taken a little too long for him to "take away" from her in my opinion, and no doubt it is because he is trying to let her hold on to whatever she can for as long as she can. It's a hard position to be in.

One of the few things that mom does everyday is her hair and make-up, as you all know from my other posts! She religiously dyes her hair every 8 weeks and marks the calendar for every 8th Friday as "dye hair" day. Mom is losing her concept of days (I'll touch on that in another post) so on Monday she had it in her head that it was hair dyeing day-which means that I was the lucky one on duty to supervise mom in her hair dyeing adventure. 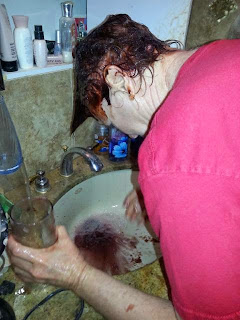 When I first arrived, I had no idea that mom was dyeing her hair. When I heard both the sink running and the blow dryer going, I knew it was time to peek in on her. I found the blow dryer on the floor beside her, blowing on the rug, and mom bending over the sink in my dad's Rolling Stones t-shirt. She wore a plastic glove on her right hand, which clued me in on what she was doing. As I approached mom at the sink, I saw reddish-brown water dripping all over the counter and into the sink. What was most alarming, however, was the stream of dyed-water tricking into her eyes.

"Ouch, this is so weird ouch, I don't know why it's hurting here ouch," mom mumbled, rubbing her plastic, dye-covered gloves over her eye.

I tried to make her understand that it was the hair dye dripping into her eyes that was causing her discomfort. I tried to convince her to hop into the shower. Of course she didn't understand any of my direction. Instead, she nudged me away and continued to fill her Princess House Crystal glass with water and dump it over her head. I admit I really didn't know what to do and so I let her continue to rinse. I suppose I probably should have stripped her down and thrown her in the shower. But I felt as though that might be a violation of her and I was unsure if that was the right answer (aside from the fact that mom is bigger than me...I'm not sure if I could handle her alone). When mom felt as though she had rinsed enough (all of the dye was NOT out of her hair), she spun her head around and, without wringing out any water from her hair, made her way to a towel she had hung over the shower stall. Water and dye left a pathway to her shower stall and stained the clothes she had thrown on the floor.

Needless to say, there was a huge mess to clean up after this ordeal; obviously the biggest concern is not the mess, but rather the hair dye harming mom's eyes. I regretted having to relate the details to my dad. This is going to be another big obstacle for him and I feel for him. Yet again, he will be the "unsupportive" husband and will have a huge battle on his hands when he refuses to give her her hair dye. We could try to dye her hair for her, but I don't know if she will understand what we are trying to do or even allow us to do it-she is very set in her routine and her way of doing things. Maybe we can convince her to let her hair stylist do it for her; again, it's not part of her routine. Time will tell.
Posted by Cassandra at 11:29 AM