Have you ever been a driver, in your car, with a passenger who tells you every move you need to make? They may tell you to 'turn here', 'move to that lane over there', 'you need to slow down'...

Since my mom has lost her license, she has become the WORST backseat driver that I've had the experience of driving ;) I think a large part of this is her expressing her opinion of what a great driver she is. She is still adamant that UCLA was wrong, and that she's a perfectly safe driver. She reviews all the rules of the road while we are out and about, I'm sure to prove what a good driver she is. She will often make comments,

"See even I don't go fast over the speed limit like you do and like your dad does too".

"I remember what those things are right there, what they mean too, it means to stop. I don't know why they cancelled my driving, I'm still really good and still know all the rules."

"You're going a little bit over the lines too, and your dad does that too, and I don't even do that 'cause I'm still such a really safe driver".

"You need to get over to that lane over there now, you're gonna turn up there at the light so I always get over to the other lane right here" (she will say this miles before we need to turn and becomes insistent that I change lanes right away).

Her memory on how to get to places she visits often is still intact. This is classic with FTD. I don't know whether this is a blessing or a curse. Because she knows exactly how to get somewhere, she insists that you take her way. If you deviate from her course, she becomes really upset.

I learned this, one day, as I was driving her to the pharmacy. The distance from her house to the pharmacy is maybe a mile. There are several different ways to get there; you can take the main street or you can go the back way through the neighborhood. Even going the back way through the neighborhood leaves you with three different options of streets to turn on. On this particular trip, I turned down the "wrong" street.

"Where are you going??! You were supposed to turn that way! It's shorter that way! Why are you going this way??" Her back stiffened, she sat up straight and turned her body toward the window, peering out the window at the course I had strayed from.

I replied, "Mom it's okay. This street will take me there too. Besides, I'm pretty sure this way is shorter."

She was not to be convinced. "It is NOT! That's the best way to go, you're going the long way! You need to go down that other street!"

I tried to calmly assure her that we were fine; either way would get us to the pharmacy and either way we took, it would only be quicker by a matter of seconds. She would not let the issue go. Finally, she hollered at me,

"You're just like your dad!" And with that, she slumped down into her seat and crossed her arms sternly across her chest.

Just as her memory for driving familiar routes has been preserved, so has her memory of her past, particularly her childhood. It amazes me how she can recall events from her childhood clear as crystal, yet her memory of what everyday objects are is rapidly declining. I suppose it is just the area of the brain that has been affected. Semantic memory includes a general knowledge of things, not concerning specific events. Semantic refers to the memory of meanings and understanding. For now, her memory of events are intact, though even those will fade over time.

Mom was born and raised in Riverside. As we drive around town to run errands, she has memories attached to every place we drive by. And she shares each and every memory with us as we drive her around. As I drove her downtown one day, she recalled in some detail a tire shop that was down the road which her friend's family had owned.

"Did I ever tell you about the tire shop down that way? The owner people lived down the street when I was a child. I've thought about stopping by there sometime, but now that I'm no longer a driver I can't unless you would take me by there sometime, but you probably wouldn't want to do that. But I would tell them I'm a Harrington too and they would remember me too. They always really liked me too." 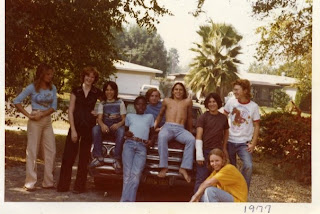 She loves to drive by Overland Street, where her and my dad were neighbors at 13 and 14 years old. There are many memories attached to that part of town, and she loves to reminisce about the good 'ol days. My mom is the second one in from the left, and my dad is the shirtless rebel sitting on the hood of the car ;)

As I drove her to get her hair cut today, she talked the entire time about memories of different places we passed, all stemming back to her childhood. I could hardly get a word in; and even if I did say something, she didn't seem to notice. Most times, I just give the occassional nod and "uh huh" or generic "that's nice" type of comments. She seems content to talk and have someone to listen.

Often times, one memory will spark another. For example, as we drove through La Sierra she remembered a restaurant that once stood on the corner of the intersection which made her remember her ex-boyfriend.

"It was a really yummy Mexican food place too, one of those fast food type places too. And I remember those Mexican boys that I dated too 'cause the Mexican boys always really liked me too. And there was the one I dated before your dad and I got back together and he turned out to be not such a nice person too and he was in that war thing" (the military) "so I'm really glad that we broke up too and that I was with your dad again, because he's so good..." She rambled on for several minutes sharing her memories and thoughts about that time period of her life.

Many of the things we hear, while driving her about, are repeated over and over. I am well versed on the history of her life in Riverside and consequently, much of her childhood. Sometimes, I admit, it gets a little old. But other times, such as today, I remind myself that it's a great thing that she is able to remember parts of her life. The day will come when she no longer remembers. So I remind myself to enjoy the moments that we have, while she is still able to speak and share these meaningful memories of her life.