Ever since I watched the movie "The Notebook", I have had this fear about either my husband or myself developing dementia later on in life. What a horrible thing it would be to lose one's memory of everyone and everything they hold dear.

Never did I imagine that my own mother would be struck down by this awful disease, and especially at a such a young age. Even though her form of dementia has no genetic links, there is always a fear deep, down inside that it will happen to me.

A few months ago, after we received my mom's diagnosis, Dr. Oz had a show about "Ways to Prevent Alzheimer's". Alzheimer's is a form of dementia, so I recorded the show in hopes of finding some ways that I can prevent this awful disease from affecting me (and to see if there was any hope to restore for my mom).

Now, I don't necessarily believe that you can 100% prevent this disease. If you are genetically predispositioned to get it, it may be out of your hands. With that said, I do believe that it's possible that things in our environment could be contributing to all of the diseases that we see among us today. Cancer, dementia, diabetes, etc...all of these illnesses are on the rise. And while many are genetically "destined" to have these illnesses, there may be others who can prevent bringing these sicknesses upon themselves simply by living a healthier lifestyle. I'm not a doctor, but much of what Dr. Oz and his colleague had to say made sense.

The nature of dementia is that the brain begins to shrink. The hippocampus is the part of the brain that controls memory, and the rule of thumb is: the bigger the better! It would make sense that if we can prevent our brain from shrinking, we can prevent diseases caused by shrinkage (such as dementia). Like I said, genetics play a big role in this. But there are some things we can do to help prevent or prolong this shrinkage from happening. Dr. Oz listed 6 steps that we can take to stimulate our brains and help to keep our brains from shrinking, preventing dementia. I want to spend the next few days sharing some of what he said; take it for what it's worth ;)

The supplement that he recommended was a DHA memory boosting supplement. DHA is an omega-3 fatty acid which makes up a large portion of your brain. Lower DHA levels are associated with smaller brain size. DHA also increases blood flow to the brain. Studies have shown that people who take 600 mg of DHA supplements every day, over a period of 6 months, will boost their brain so much that it functions as if it is 3 years younger! You better believe I will be taking these supplements everyday! 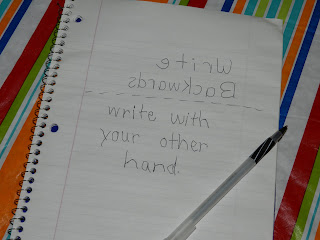 Sometimes we need to switch things up, just to keep the brain active and thinking. By "switching it up", different parts of the brain are exercised.

When I was in junior high, my best friend and I used to write mirror messages to each other. Little did I know that I was working my brain to prevent Alzheimer's! One of the suggestions was to write backwards (such a mirror messaging), or to write or eat with the other hand. Other suggestions include wearing your watch on the other hand, switching hands while brushing your teeth, or swapping hands when brushing your hair (I have yet to try this one...I don't need any more bad hair days than I already have! Ha ha).

I could continue on with all 6 today...but I'd rather spread it out over the next couple of days. Besides, my kids are home from school and ready to tackle some homework!

Tune in tomorrow as I continue with steps 3 & 4 on preventing dementia!