When I sit down to write, I usually have a clear idea of which direction I want to take my post. Tonight, I don't even know where to start.

It's been an emotional day as reality is beginning to sink in on what is to come with this horrible disease. I am fighting back the tears even now, as I write.

Today, I went over to my mom's house-partly to observe her (I'll write more about this another day), and partly to help her organize some of the clutter that is overtaking her house. Mom has been asking me to help her organize her photos. She has most of them organized in boxes, which she started long before she was "sick". She wanted me to help her find my old school pictures and duplicates of baby photos so I could take them home. 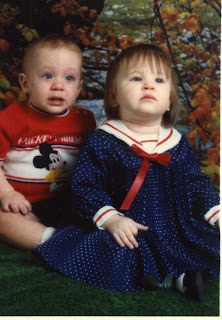 As I brought out a large storage tub of family pictures, and began rummaging through them, my mom sat on the couch, watching me sort. She picked up a large envelope of pictures and pulled out a large photo of a baby boy and girl, sitting side by side, and said, "I wish I could remember who all these people are."

It took me a minute to catch my breath. I stared at her for a few seconds and replied, matter-of-factly, "Mom, it's me and Joe." I felt very confused, how could she forget the faces of her twin babies??

I thought maybe it was a fluke. Maybe she wasn't paying enough attention or she got confused. Or maybe I knew, but I just wasn't ready to accept it. As we continued sorting, I occassionally quizzed her on who different people were in the pictures we came across. It broke my heart to watch her struggle to remember the faces of the people she loves so dearly. 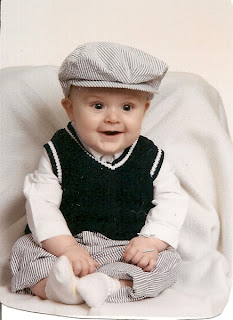 "Looks familiar...it's not Joe, is it?" she asked, as I showed her a picture of her firstborn grandbaby.
Jeremy was her pride and joy. She doted on him like any proud grandma you've ever seen.
She always loved this picture, in his little vest and adorable coordinating hat (she even helped picked it out, if I remember correctly). This picture hung on her filing cabinet at work for years as she was filled with great pride to show off her grandson.


We finally found some of my school pictures. This was my Kindergarten class picture? Can you pick me out in the crowd? 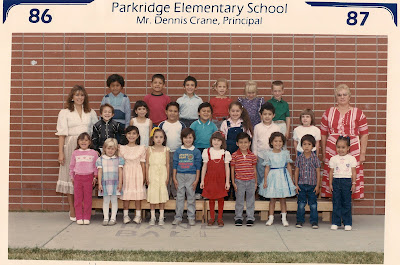 My mom was very confused when she saw the picture. She was expecting to see me as an adult. Maybe it's because I used to work for the school district, and she had many class photos of her own with her class. She squinted at the picture, pointed at teacher and said,

"Oh...I'm confused, I don't see you in this picture." She ran her finger over each and every kid in the class 3 times before her finger finally rested on the girl in the front row donning a red, velvet, jumper dress.

"That one is me, mom," I said, reassuring her that she found the right girl. 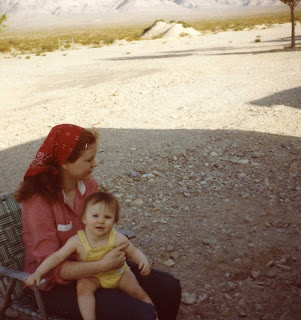 It seemed that almost every picture of the past that I presented to her brought on confusion. If the person looked vastly different than they do today, she did not recognize them. Obviously we look very different now than we did as babies. Her memory of how we looked at that time seems to have disappeared. I even showed her a picture of herself, in her younger years, that she could not recognize.

"Is this you?" she asked, as she glanced at me, then back at the picture.

"No," she answered her own question. "But it's reddish hair too but I don't remember who that is."

When I told her that it was her, she answered with, 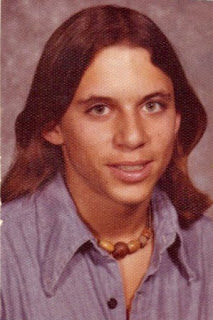 I thought for sure she would recognize this picture: the love of her life, my dad. I showed her one of the favorites of dad, taken when he was 15 years old, sporting a wooden bead necklace which he later gave to her. We used to love this picture when we were kids, chuckling that dad had long hair and was wearing a necklace! I was sure this picture would do the trick.

When I told her it was dad, she said,

"No. That's not him. I don't remember him looking like that."

That was the point that reality smacked me square in the face. My mom's memory is being erased. She is forgetting the ones she's loved the most. Sure, it's just faces of the past that she can't recall. But what is to come in the future?

My heart aches that my mom cannot recognize my face in the past. I can't imagine the pain that will come when the day is here that she does not recognize me in the present.

Posted by Cassandra at 9:24 PM