I have a very distinct memory of a trip to the mountains that we took when I was a small child. I remember my cousin, William, went with us. I don't remember too many details about the day-I believe we were up there playing in the snow. But the ride home was an experience that has been seared into my memory. I suppose, at the time, it was a bit traumatic for my 7 year-old self, which is why I remember it so well.

As we made our way down the windy mountain road, William, who was sitting beside me, started feeling a little queasy. Without any warning, he began barfing, thankfully catching it in his hands. As soon as my mom realized what was happening, she pulled our Ford Aerostar van over to a turn-out on the side of the road. Somebody (I can't remember if it was my mom or someone else) quickly made their way to the sliding door with an empty paper bag, putting it under his hands as the contents dripped inside. I still remember the pungent smell of what he ate as I sat beside him and observed the scene. It was all I could do to not lose my own lunch. As soon as we were able, everyone was hopping out of the van to escape the stench of vomit.

This incident popped into my head again the other day as we drove to my sister's college graduation, which is about an hour drive from where we are at. My dad drove their SUV, with mom in the passenger seat, my sister, Christina, behind her, my Aunt Claudia behind my dad, and me in the middle. Over the past couple of years, mom has become very sensitive in the car. Aunt Claudia told us a similar story to what I've just shared, where my mom had thrown up on her (Claudia) in the car when they were kids. Apparently car sickness was a problem for her as a child, and it's a problem for her again, now, as she's reverting back to her childlike ways.

We've had incidences of mom throwing up in the car before, usually when it is a longer trip. My dad found a connection with her vomit and Slim Fast; it seems that when she drinks her morning Slim Fast and takes her medication along with it, it makes her more sensitive in the car. She throws up every time. My dad has forbidden her from drinking Slim Fast before a long trip. I know that might sound harsh, but remember that she is a child now. Skipping the Slim Fast works. She doesn't throw up if she doesn't drink the Slim Fast.

That particular morning, however, she was able to sneak in her Slim Fast. Sure enough, she got sick in the car. All the way to the graduation, she made burping and gagging noises and spit in a small plastic bag. I think I speak for everyone in the car when I say that she was psyching herself out; the more she thought about it, the more she exaggerated her sound effects and in essence she was making herself throw up. Out came the chocolate drink into the small bag. We passed another bag up to her, as the one she had was simply too small and was beginning to leak from the bottom. We told her to put the small bag inside the big bag.

"Deana, it's leaking, put it inside the other bag," my dad tried to explain.

We went back and forth with mom, her not comprehending that the bag had a leak. We eventually forced the bag under her small bag. All of the sudden, she took a tissue and began rubbing her leg and the seat underneath.

"How did this happen?" She said as she scrubbed the drippings from her seat.

By this point, humor was the only thing keeping us sane. Every time she gagged, it made us gag. She would hold up her bag to examine it's contents and occassionally sniff it; dad would tell her to put it down, and we, in the back seat, were rolling down our windows to catch a fresh breath of air and get our gag reflexes under control. Unfortunately for me, I was stuck in the middle seat and didn't get to partake in all that fresh air. At some points, mom's gaggging noises were so loud and obnoxious that I had to plug my ears and start (loudly) humming a song to drown out the sound effects. My sister was laughing at me. My Aunt was dry heaving. My dad went from reeling at the vomit, to joking, to laughing at all of us in the back seat with our weak stomachs. The scene was actually quite comical.

We made it to the graduation without barfing all over each other and sat there for over three hours, without food. By the time we were done, mom was very antsy, tired, hungry and had a headache. An empty, grumbling stomach does not help with car sickness. I tried suggesting a burger stop, but nobody listened to me. Bummer. The ride home was FAR worse than the drive there. She was burping, which turned into gagging, which turned into spitting and heaving, with small amounts of barf mixed in there, the ENTIRE drive home. To make matters worse, mom had left her barf bag in the car during the entire ceremony, despite my dad's reminders to take it out and find a trash can. You can imagine the smell. 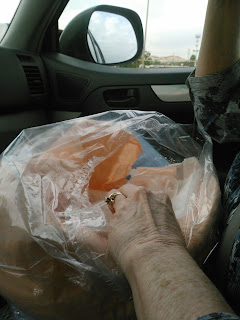 As she began her heaving on the ride home, we quickly realized that were out of bags. My dad urged me to look around for something that would work. In the back seat behind me was a bag filled with puppy pads (for potty training puppies). Thank goodness my sister didn't clean up her things after she had borrowed the SUV! Ha ha. I hurriedly dumped out the puppy pads and molded one on the inside of the plastic bag that was holding them. We were joking and laughing as we presented mom her new barf bowl. She didn't understand the concept at first but eventually utilized my handicraft.

As we were approaching our freeway exit (to home), somehow mom got onto the subject of wanting to go on vacation together this summer to Nauvoo, Illinois. She wants to drive through Utah and Colorado, visiting family along the way, until we reach Nauvoo, altogether as one, big, happy family. The drive is almost 2,000 miles with over 26 hours spent in the car. My dad, sister and I looked at each other with amusement. That's just not going to happen.

Thankfully, the rest of us made it through 2 1/2 hours in the car without throwing up on each other. Poor mom.