The Changes of Life

When I was in high school, I was a part of something amazing: The Rubidoux High School Madrigals, under the direction of Ms. Staci Della-Rocco. Ms. D (as we affectionately called her) was an extraordinary choir teacher. She was passionate about music and was exceptional at teaching kids music. I know choir has a bad rap in some schools; at Rubidoux kids were lining up to join choir, from football players, cheerleaders and jocks to student body...being in Ms. D's choir was anything but "nerdy".

And we were good. Ms. D had the innate ability to take any Joe Schmo and turn them into a singer. Ms. D was a perfectionist and her choirs were a direct reflection of her as a choir director, and so she pushed us to perfection. Going to Ms. D's concerts were nothing short of magical; her music touched you at your very core and you could feel the power and influence through her singers. Her concerts became so popular, in fact, that if you did not arrive early, you would not have a place to sit.
Belonging to madrigals meant you belonged to another family. We were close. To this day, the friends I keep in contact with from high school are my friends from either church or choir. We were always together; we performed nearly 100 times a year at various clubs and events, particularly at Christmas time. By the time Christmas day rolled around, our voices were hoarse from so many performances. Her music, and performing with the madrigals, is what put me in the Christmas spirit. Every year we went on tour somewhere exciting: Hawaii and Disneyworld were among my favorite trips. Ms. D was a teacher of music, but she taught us so much more than that. She taught us about friendship and love, about acceptance and tolerance, commitments and responsibilities, self confidence. Part of who I am today can be linked to Ms. D and her influence in my life. After graduation, we remained very close friends.

Three years ago, Ms. D passed away at the age of 51 after a long and brave battle of breast cancer. She was the first person who passed away that I was very close to. It was difficult for me and for all who have been touched by her. Over 800 people came to honor her at her funeral (and hundreds more who would've loved to be there, but distance kept them from attending). It was a devastating loss for the school, the community and for all of those who have become friends with her. A year after her passing, the High School named and dedicated their new theatre after Ms. D. I couldn't be more proud and can't think of anyone who deserves this great honor more than Ms. D. 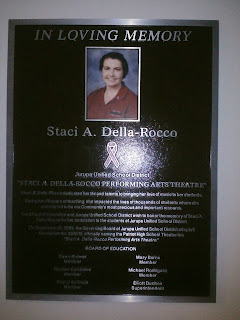 Losing Ms. D has been very hard for me, especially at the holidays. I miss her. I miss her music. In fact, Christmas just isn't the same without her concerts, downtown caroling and musical cheer. Even 3 years later, we all still feel the void. 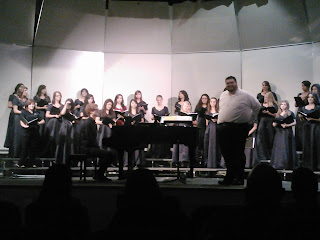 This week, my adopted-daughter had a choir concert. Since we moved back to the area I grew up in, she attends the new high school in our area, which is where Ms. D finished her teaching career. It has been difficult for a new teacher to come and take over the vocal program, as Ms. D was a legend in this community and at this school. They have already gone through one teacher; they are now on their second. It is impossible for any choir teacher to fill Ms. D's shoes, and the program has been struggling. I had mixed emotions and I attended Maurina's concert. I am so happy to see her involved in the music program, as it is obviously near and dear to my heart. I didn't realize how hard it would be to sit through the concert, the concert where my beloved Ms. D no longer directed.

The kids did a great job and I am very proud of Maurina. But a sense of sadness washed over me as I reminisced about the greatness of what once was. The room was half empty. The kids were not uniform in their appearance. The dynamics and the passion was absent. The magic is gone.

As I sat in the audience, thinking of Ms. D, I reflected a lot about life and the changes it brings. I miss Ms. D. I miss that magical time in my life. Not that I'd want to go back, but it was a time when life was simple and happy; a time when my biggest stress was a math test or whether I'd get asked to the prom. It was a time when all the people I loved were still here: Ms. D, my grandma and grandpa, my mom. As I thought back to that time in my life, I thought a lot about my mom and the person that she was back then. She was happy and outgoing and loved life. She supported us in all we did; she never missed a concert and she always gleamed with pride watching me and my siblings perform our music. Oh how life changes.

After a brief intermission, the choir director took a moment to recognize that October is breast cancer awareness month. He spoke of Ms. D and mentioned the theatre which has been named after her. He asked us all to take a moment of silence for her and her memory.

That is when the tears began rolling down my cheek. I cried for Ms. D. I cried for my grandparents. I cried for my mom. I cried for the difficult changes that life has brought. What I would give to have simplicity and happiness again, to be rid of the sadness that lingers when we lose the people we love.

I say it all the time: make the most of today. Make all the memories you can, while you can. You never know when the people you love will be gone. And when that time comes, all you have left are the memories of what used to be. Make them count.