Have you ever been out in public and seen the moms with leashes on their kids? Are you one of those moms? I am. The idea of leashing children seems to spark controversy among some people. Before I was a mom, I was indifferent on the subject.

When my daughter was 2 years old, we were shopping at Target and she was adamant that she didn't want to sit in the cart. After several minutes of thrashing around, we finally compromised that she could get out of the cart as long as she was holding on. She was doing really well, until we started walking through the children's clothing section and she suddenly saw something that caught her attention. All it took was one second for her to let go of the cart (mind you I was right next to her and watching the entire time) and she was off running through the maze of clothing racks. I was pregnant at the time, and not as quick on my feet as I should've been; I circled around the rack to grab her and panicked when she wasn't there. I began calling her name and frantically weaving in and out of the compacted racks as my heart raced in my search for her. Finally, after about 45 seconds which seemed like much longer, a woman raised her arms and called to me that she was "over here". 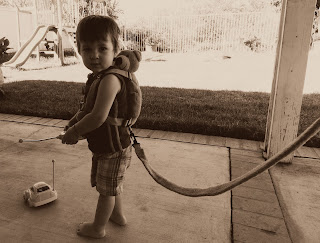 Guess what my husband and I bought the next week? Judge all you want, but I will not take the chance of losing my child and the fight to keep them in the cart can make any shopping experience unbearable.

I thought about this idea of "the leash" as I took my mom to Wal-mart yesterday. It started out as any ordinary shopping trip with mom. As I was pulling into the parking lot, she reminisced about a parent of one of her students when she was a "teacher thing" who used to work at this Wal-mart. That should have been my red flag right there. We pulled into a parking spot, and as usual, I barely had time to put the car into park and mom had her seatbelt off, got out of the car and began power walking to the store. She was across the street and to the entrance of the store before I could even get my 2 boys out of the car. I quickly got the boys out of the car and made a mad dash to follow her before she could begin her shopping.

Shopping went as expected. She had a hard time finding the make-up that she wanted. Luckily, she brought the empty bottle of lipstick and half used pallette of eyeshadow with her, so it was easy enough to find it for her. When we got to the cleaner aisle, she became frustrated with me when I put Comet in her cart, even though my dad explained to her before we left that he wanted Comet versus the cleanser she's been buying, as it works better. It made no difference how many times I tried re-explaining it to her, she was not processing what I told her. I had to compromise; she could buy the other brand cleaner, but the Comet was to be bought for dad. After some resistance, and a distraction with Lysol, she finally gave in.

Things seemed to be going relatively well, we had made it through shopping without any incidences. And then we went down our final aisle. As I helped her find her "delicious" turkey lunchmeat, I told her it was now time to go check out at the register. A vendor was blocking the end of the aisle with large crates and he was unloading goods onto the shelves. I told him that I needed to get by and he graciously moved the crates out of my way. I glanced behind my shoulder just in time to see my mom at the opposite end of the aisle, turning the corner away from me. I quickly apologized to the man and turned my cart around, racing after her.

I found her in the layaway section. There was a younger, hispanic woman sitting in a chair at the counter, and an older, caucasion woman standing next to her, talking. I came up behind mom, who was staring at the hispanic woman, just in time to hear her mumbling,

The two women looked at her with a very confused expression on their faces.

"Can we help you with something?" the older woman asked.

I put my arms around mom's shoulders and tried to redirect her.

"I don't think she works here anymore mom," I said, trying to turn her around. I glanced back at the two women who had a look of confusion and the hispanic woman almost had a look of disgust or annoyance on her face.

I quietly told them, "sorry, she has dementia," to which the older woman gave a kind smile. The hispanic woman still looked confused. Mom turned back around, looked at the women, and said,

"It's just so sad because I can't go visit her at her house anymore since they cancelled me as a driver."

The older woman gave a sympathetic look and I directed mom away and towards the cash register. I should've given them an "oops" card.

I'm not so sure about a leash for a grown woman, but I do think it's time to make her wear the ID bracelet that we bought for her at the LA County Fair this year. It's hard to get to this point and have to treat her as a child; I am sure there is some of reluctance with my dad to put the bracelet on her. She will resist, she will feel as though we are "picking" on her; it's difficult to have to take away independence from someone you love. Yet I feel like it's getting to the point where it is becoming necessary to take these precautions.

Email ThisBlogThis!Share to TwitterShare to FacebookShare to Pinterest
Labels: out in public with dementia, shopping, wandering